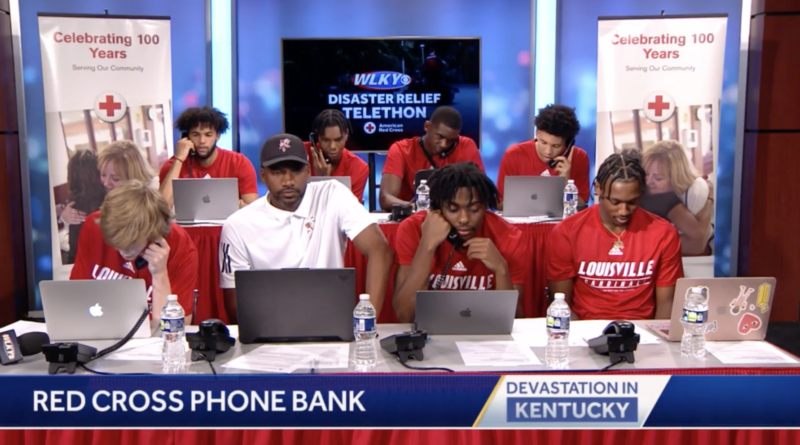 The devastation wrought by the overwhelming flash floods in Eastern Kentucky is bringing out the best in people across the commonwealth, including several segments of the University of Louisville community.

Among the most visible efforts was the involvement of the UofL men’s basketball team in a fundraising telethon on WLKY 32. The Cardinals manning the telephones and raising a total of $63,668 in just over two hours. The players stating they want to give back and help people in their time of need.

The UofL Athletic Department also is collecting water to be shipped to eastern Kentucky. Gallon jugs are particularity needed. Drop-off will be Thursday, August 4 from 8 a.m. until 8 p.m.at Cardinal Stadium. The Admissions Office has already contributed 200 cases of bottled water.

Football Coach Scott Satterfield made it a point to talk about the devastation before Tuesday’s Media Day press conference. “Thoughts and prayers for those in Eastern Kentucky battling those floods,” he said. “There are some awful pictures coming out of there. I know we have some things going on help those people. We are just a small part of what we can do.”

UofL Health is providing $25,000 to the Red Cross for disaster relief and is sending supplies and support to Mountain Comprehensive Health Corp., which operates nine primary care in Appalachia. The School of Dentistry is assisting the Mountain Comprehensive Care Clinic with treating patients with acute dental emergencies. The dental school also is working with Delta Dental to send its mobile dental clinic to the area.

The Kent School of Social Work and Family Science’s Center for Family and Community Well-being is collaborating with Volunteers of America to assemble donations through VOAmid.org/EasternKYFloodRelief and the Recoverey Community Center In Manchester.

The School of Medicine’s student body is asking for supplies (bottled water, hygiene products, household products, etc.) to be dropped off in the SOM Office of Student Affairs. Additionally, they are working closely with KY Area Heath Education Centers (AHECs) to assist with their “boots on the ground” activities to provide any support that they need.