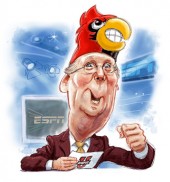 As everyone in the state should know by now, U.S. Senator Mitch McConnell, as the leader of the minority party, is among the University of Louisville’s most influential and powerful fans.

His affinity for Cardinal athletics apparently take priority over many other national concerns, according to Senator Mark Pryor, who represents Arkansas, who told Press Pass:

“It’s not really a closely guarded secret, but they don’t talk about it too much, … Mitch McConnell, the Republican leader, is a huge Louisville fan. Huge — off the charts, I mean he’s an unbelievably big Louisville fan,” Pryor said Friday in an interview on The Ticket radio show on 92.1 FM. “I think sometimes we schedule our votes around either Louisville, either football or basketball games.”

McConnell will be making his 28th appearance on Meet The Press this Sunday.