Now there are two Louisville teams in the finals.

The latest entry those giant slaying party crashing Cinderallas from the University of Louisville, continuing to wreak havoc in the NCAA Women’s Basketball Tournament.

Not happy just being there, refusing to go away, challenging the biggest, the best, demanding to be the life of the party. 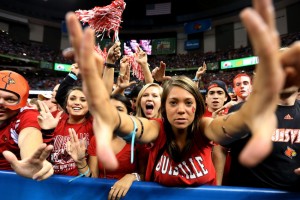 Not without a heavy dose of drama, however. Shoni Schimmel would be rendered ineffective offensively by Laysha Clarendon, Sara Hammond was in foul trouble most of the game, and Monique Reid was feeling the aches and pains of her season-long knee injury.. California was having its way, Clarendon, the one with the Mohawk hair, paving the way to a 37-27 lead over the Cardinals.

Shoni would wind up with 10 points, her antagonist Clarendon with 17.

The Lady Cards for a while resembling one of those teams that disappear every year after impressive wins in the early rounds. That was before Jeff Walz had an opportunity to impose his mindset on them at halftime, telling them they were playing scared, playing without heart, forgetting the scouting report, allowing California to push them around.

Louisville re-emerged composed and quickly narrowed its deficit with a 7-0 run that began with Schimmel’s 3. Smith added a mid-range jumper and Hammond scored inside to make it 37-34, The Lady Cards had served notice that they weren’t going to roll over.

Not with Bria Smith slashing to the basket time after time. When Bria wasn’t committing one of her eight turnovers, she was drawing fouls, going to the line, hitting five of six free throws. She was wind up with 17 for the night.

Not with Antonita Slaughter finding her range again, hitting on six of 10 three-point attempts for her 18 points.

Not with Sara Hammond in at the end, hitting two crucial free throws to finally put her team ahead again, muscling her way in for three tip-ins. Playing physical, taking it, giving it, tough when she needed to be.

Not with Bria and Jude Schimmel swishing four of four free throws at the end.

The Louisville women remember what happened the last time UofL made the NCAA Championship game in 2009 only to be crushed by UConn, the most dominant program in NCAA history. . Or this season when they were  squashed  again by UConn for umpteenth time, taking advantage of the scared, timid and awe-struck Cardinals in those games.

The party is far from over, and the mother of all giants is coming through that door.