Charlie Strong said his University of Louisville football team is growing physically, intellectually, emotionally and spritually.  There’s no better example than defensive end Greg Scruggs who seemed to have trouble finding a classroom before last season. 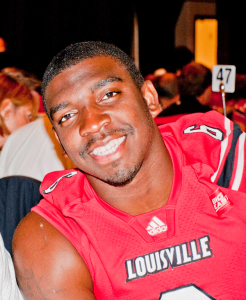 Strong said he attended one of Scruggs’ classes last season where a teacher recognized the U of L coach and asked him he would like to speak to the class. “I told her I didn’t want to speak, that I was there to make sure the kid in the gray sweats was present.”

Scruggs in excellent standing accademically this season, sitting in the front row of every class. When he joined the team, he was a tall, lanky kid weighing 260 pounds. Today Scruggs is a man, weighing in at 288 pounds of solid muscle.

“He will graduate this December,” said Strong. “He’s doing everything we’ve asked and he’s doing what’s best for him.