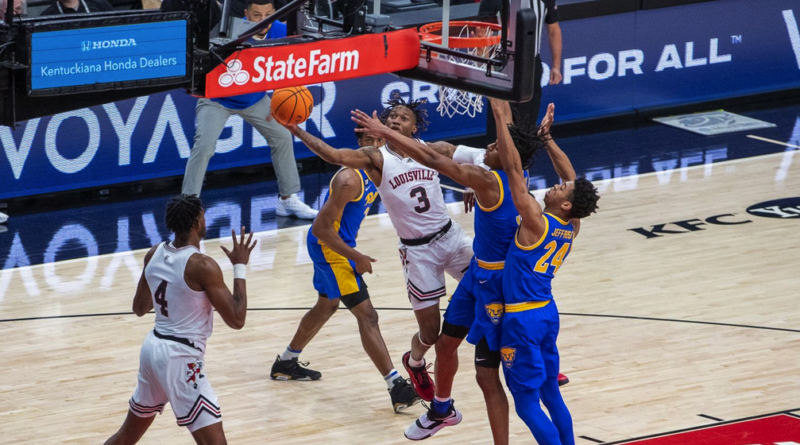 Four technical fouls in the first two minutes — three on Pittsburgh, one on the University of Louisville — setting the tone was what would be an otherwise unforgettable basketball game.  Topped only by two more UofL technical violations in the final minute of the game. The clock running out before any more can be called.

Louisville prevailing 75-72 in front of 11,973 at the KFC Yum! Center on Wednesday. A game in which officiating dominated from beginning to end in what resembled a grudge match. Rough and tumble beneath the basket. The big guys, John Hugley of Pitt and Malik Williams, getting in foul trouble early, Hugley spending much of the first half on the bench. Williams picking up a technical after he had fouled out of the game, responding to some Hugley comments.

Coach Chris Mack adding to the spectacle, picking up a technical as well in the final minute. Adding to the confusion with some off-color comments, putting his team in jeopardy.

The UofL coach is on the winning side largely because of the emergence of junior guard El Ellis. The 6-foot-3 transfer from Tallahassee Community College scored 14 of his 18 points in the second half.  Including a go-ahead 3-pointer with 5:11 remaining for a 63-61 lead. He added another go-ahead jumper and two free throws to make it 67-63 before Sydney Curry added a layup and a Noah Locke 3-pointer for a 72-65 cushion.

“He is a fantastic finisher for his size,” said Mack. “Pittsburgh is long at almost every position and their center is a wide-body guy with a great IQ, so Ellis getting in there, a lot of guys can get in there, but don’t have the ability when they are El’s size to finish. He can really finish.”

Significant contributions, too, from Locke with 13 points and four rebounds, Samuell Williamson with 9 points, five rebounds, two assists and a block, and Matt Cross with 9 points.

Gotta keep those emotions under control as the season progresses. Pittsburgh had more than its share of technical fouls but future scouting reports will note that UofL is also susceptible.