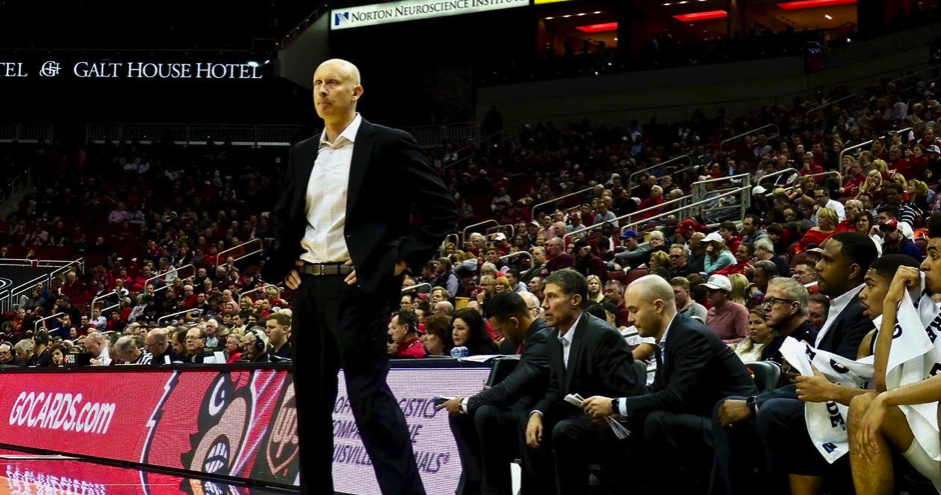 No light show. No banter. No saluting “The Godfather” of Louisville men’s basketball. Chris Mack walked onto Denny Crum court at the KFC Yum with his assistant coaches before their exhibition game with Bellarmine with little fanfare.

No pomp or circumstance. Just Coach Mack. You might have an idea that I didn’t care for coach Rick Pitino’s grand entrances. “Oh, your kicking a guy while he’s down.” Or, “It’s a part of college basketball’s pageantry.”

I’m saying Mack is a regular guy. Less ego. Easier to deal with. He’s already proven that with his Twitter feeds day and night. Fans love it. It’s the wave of the future. Pitino has one now, too.

There was never a man or woman in the University of Louisville press room that wasn’t on guard, particularity after a Cardinals’ loss, anxious that Pitino would explode after a question he didn’t feel had merit.

Yes, the sports media has reporters that have their own their own agenda. I’m sure in my years of reporting I’ve asked some doozies. I understand there is a lot of pressure on coaches and players, especially after a tough loss.

But don’t make things worse. I know some journalists will persist. Some should, others should not. Coaches are going to tell you what they want you to know. Most everything has a smoke screen anyway. I’ve always thought the facts support themselves.

Louisville struggled to beat a good Bellarmine team, especially in the first half, but did win. After the game it took Mack about 20 minutes or so before he arrived in the press room.

“I apologize for being late, the Bengals were kicking a field goal to win the game,” said Mack who drew laughter from the assembled media. “I have no problem with that. Or do I have a problem with Pitino who would watch the end of Minnesota’s games that his son coaches.

I’m sure coaches and players don’t appreciate the media second guessing every move they make. I could only imagine after a two plus hour basketball game of running jumping and having someone yell at you asking “Why didn’t you block out, or you ran the wrong way off the screen,” gets old.
Then comes the questioning from these so-called experts who never played the game, much less sprinted up and down a basketball court 45 to 50 times during the game.

So when Mack walked on the floor for his first time as UofL head coach what did he feel? “For the first four minutes when we didn’t have a basket, I wanted to go sit up I the stands with my wife and kids,” said Mack.

“No. It’s special I’ve said that any time I’ve interviewed. It’s one of the reason I’m sitting here before you guys how much this means to all of college basketball and certainly to the Louisville community and the University.”

I think it does mean a lot to Mack. He left his alma mater, Xavier, and Louisville basketball is somewhere in the top 10 or even top five of college basketball’s pecking order. “I coach with a lot of pride,” said Mack.

Mack remembered an exhibition game coaching against Bellarmine and coach Scott Davenport in 2010. His Xavier team led by 10 points at halftime only to lose to the Knights at the Cintas Center, 63-61.

“We lost to Bellarmine in nearly the same circumstances (as last Sunday),”said Mack. “They evaporated that lead and our guys didn’t play well that day. Most important thing is learning from it and moving forward.”

Davenport’s son, Doug, coached at Xavier in 2012 where he earned his Masters degree. He knows what Louisville fans should expect.
“I think what people will get from coach is they will become a very, very sound basketball team,” said Davenport. “A team you have to beat that won’t beat themselves. More games are lost than are outright won when you beat someone. More often or not one team loses.

Now I know Mack is probably going to have his moments where he is unhappy with his team and the media, fans, etc. But one thing for sure. No more pomp and circumstance from The Godfather.

One thought on “Ed Peak: Succeeding the Godfather comes easy for Chris Mack”