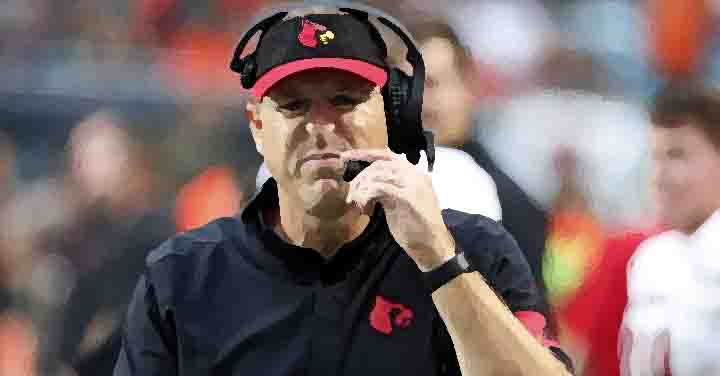 The wolves of social media were in full force early this week. After Louisville’s 42-24 loss to Old Miss in the Chick Fill-a Kickoff game Cardinal fans weren’t happy. They still aren’t happy. They won’t be happy for a while.

Eastern Kentucky comes to Cardinal Stadium for a Saturday night game at 7. The Colonels (1-0) serve as a get well quick card. Even a lopsided victory won’t serve as a healer. Just a band aid.

The local newspaper ran a column Wednesday, by Tim Sullivan. I don’t agree with Sullivan a lot. But I take sides with him on this one. No reason to fire coach Scott Satterfield. In his third season, Satterfield is 12-13. He didn’t exactly inherit a ton of talent left over by Bobby Petrino.

Satterfield’s flirtation with the South Carolina coaching job looked bad. Cardinal fans are all too familiar with this scenario. Check Petrino 1.0. Charlie Strong. Howard Schellenberger. All thought the grass was greener other places.

Any notion of stuffing Satterfield, however, at this time or anytime this year is ridiculous. He deserves this year and next. I’m not giddy about this team or his coaching. But you don’t fire football coaches just because of one loss. Yes the Cardinals looked ill prepared. They had few, if any, playmakers. Junior quarterback Malik Cunningham was shaky. He threw an interception danced in the pocket and stared down receivers. His second half was better. Not great.

Let’s take some positives from Monday. Trailing 26-0 at halftime at least the Cardinals competed scoring three touchdowns and a field goal. Not that that means a lot. But this program and Cardinal fans need a boost.

Don’t look for fans to be stoked for Saturday. Attendance will be up after a Covid season but down for a normal season opener. As one Cardinal fan told me, “I love UofL but I’m tired of all the controversy.”

You and everybody else.