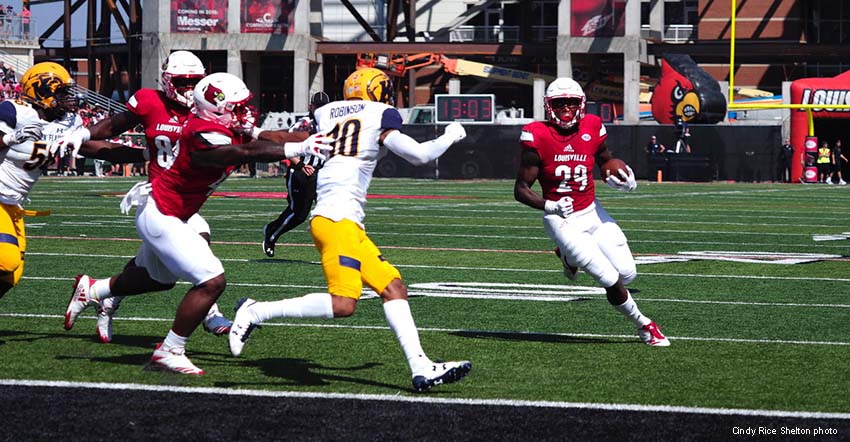 The lasting memory for most fans who attended the University of Louisville-Kent State football game will be of the squirrel showing up around the 50 yard line late in the second quarter. With nobody bothering to challenge it, the rodent would scamper 50 yards to the end zone.

Stopping to catch its breath or bask in the admiration, the creature draws the only roar of the day from the crowd of 47,812 at Cardinal Stadium. It then wanders over to the Kent State sideline where it is cornered and bagged by the grounds’ crew for second loudest cheer of the day.

Coming on a day when Lamar Jackson would be out-gained on the ground for the first time in his college career in a 42-3 win over Kent State. Not by the squirrel but by senior teammate Malik Williams who had 51 yards rushing while Jackson chalked up only 41 on the ground.

Remains to be seen, however, whether Williams’ performance on Saturday moves him past Reggie Bonnafon in the pecking order. Williams would be good for two touchdowns, on runs of 3 and 33 yards while pulling down four passes for 43 yards. Bonnafon, meanwhile, had 18 yards rushing and 30 yards on two receptions.

One of Jackson’s better days throwing the football, completing 18 of 22 attempt for 299 yards. Think maybe that’s what his Coach Bobby Petrino demanded on him, stand in the pocket, do those progressions, and be accurate. Best percentage ever but one of those misses was an interception.

Hard to draw any conclusions about improvements against one of the most challenged teams in college football, but Kent State’s 11 passing yards were fewest allowed by Louisville since Western Kentucky University was held to 10 yards in 1989. The Cardinals allowed Kent State only 10 yards rushing and recorded 14 tackles for loss Saturday.

The face Kent State will see in their nightmares for a few days will be that of UofL freshman linebacker Dorian Etheridge, who was in on nine tackles, including nine solo hits.

As for the squirrel, it was not available for comment after the game, having been escorted to Belknap Campus to join his many buddies there.