Fifteen seconds into the game between the University of Louisville and Cincinnati women’s basketball game, Jeff Walz calls a time out.

No apparent reason, Walz quickly summoning the team to the bench. Officials looking about, the press table clueless, the crowd buzzing. 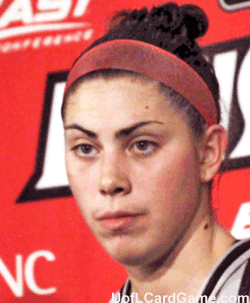 A quick huddle with the coach, from which the UofL players emerge with sheepish grins on their faces. No one beside the players knowing what has happened, some suspecting a possible wardrobe malfunction.

Much later, 10 minutes after the game in the press room, Sara Hammond would explain.

“I’ve been struggling the past couple of games with rebounding. I haven’t been doing what I was supposed to do, especially as a post player. Coach said before we came out, `The first rebound you get, I’m going to call a timeout and we’re all going to celebrate.”’  And that’s exactly what he did.

It was that kind of night for UofL women, a night where everything was going right. The Lady Cards would build a 31-15 lead at the half, then coast the rest of the way to a 72-33 victory over Cincinnati.

Sara would wind up with eight rebounds, four steals and 12 points.