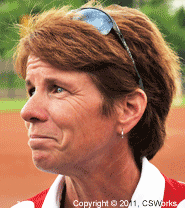 Three runs in the first inning, nine in the second, and six in the third.

The UCLA softball team having a field day against the University of Louisville Saturday in the runners-up bracket of the NCAA tournament. The final score was UCLA 19-2. Could have been much worse, mercifully the game being shut down after five innings. Embarrassing for the host team, still another early out in NCAA action. Indications of discomfort from the fan base, some individuals wondering out loud about Coach Sandy Pearsall’s ability to take the program to the next level. Coming on a day when the Cards had lost earlier to Alabama-Birmingham 7-4 and eliminated from the tournament.

A couple of UofL donors who were there say they were frustrated and humiliated, asking if it may be time for a change. A bad day all around for people close to the team, anticipating much more. There was similar debate on at least two fan message boards.

A good indication of the growing level of interest in the program but somewhat unfair, considering what Pearsall has accomplished.

She has set high expectations, compiling a 553-274 won-lost record since building the program from ground up, starting in 1999. She has guided UofL into NCAA play 10 consecutive seasons. This year’s team had a 47-13 record, following on the heels of the best-ever 55-5 season last year.

No one is hurting more than Pearsall herself, who will find plenty of motivation in the program’s most recent shortcoming.

Expectations are fine but keep them in check.