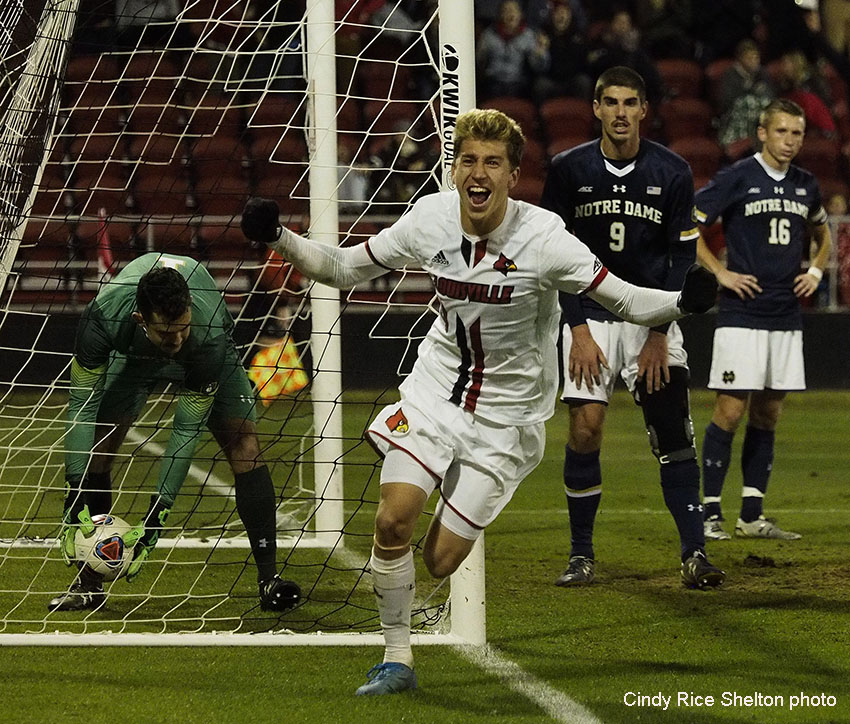 Having sat through three consecutive University of Louisville losses over the extended holiday weekend, one was more than little apprehensive about showing up for the UofL-Notre Dame soccer NCAA tournament game on Sunday.

Why risk more disappointment? Probably because the soccer team has L-o-u-i-s- v-i-l-l-e on the front of the jersey and this UofL fan believes his team is always going to win the next game.

The Dr. Mark and Cindy Lynn Stadium turned out to be the perfect place to shake the doldrums, with more than 1,858 fans in attendance. Their enthusiasm embodied in the raucous group of students behind the east goal who never stopped singing.

The UofL soccer team would not disappoint any of them. The decisive goal coming at the 19:53 mark in the second half — an in-your-face boomer by sophomore Tate Schmitt of a corner kick by his classmate Danny Reynolds.

Freshman Cherif Dieye would break free for another goal with six seconds remaining to seal a 3-1 victory over Notre Dame. The win sends Louisville to the NCAA’s Elite Eight for the first time in four years and the fourth time in the seven years.

Louisville soccer ending the weekend on a high note, evoking memories of a deep tournament run in 2010, creating the vision of some special magic over the next couple of weeks. The Cardinals will next clash with Stanford here on Saturday .

UofL fans needed some positive news and the soccer team was happy to oblige.