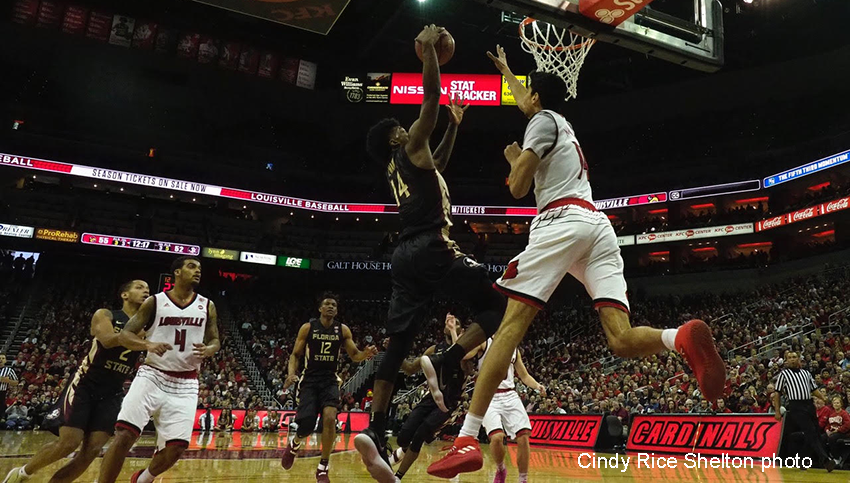 Quentin Snider heating up, his shots going in. The guy with the hot hand, the one one wants to make that last shot. Something for the fans to remember, maybe.

The senior guard making three of the University of Louisville basketball team’s four field goals in the last five minutes. Including two 3-pointers, UofL slashing an eight-point deficit to two points with 17 seconds to go.

Snider with a look on one trip downcourt that said he would not be denied, twisting to the left, around a defender to make one of those three’s from 25 feet. Setting up a dramatic finish, the highlight shot, the leading role.

As Snider’s fate would have it, however, he would not see the ball on that final trip downcourt. V. J. King would take the shot, see it blocked, and Louisville was done. Losing to Florida State 80-76 in front of a crowd of 18,305 at the KFC Yum! Center.

Quentin would score 11 of his 15 points in that second half, giving his team a chance. Showing how it’s done, handing out seven assists for the game, but still looking to be reciprocated. Deng Adel getting scoring honors with 19 points, Ray Spalding with 13, and King with 10.

Lots of indecisiveness in those closing seconds, mindful of earlier losses. Seemingly obvious choices overlooked. Uncertainty, lack of confidence, lack of awareness and lack of direction, it was all there. The player with the hot hand lost in the confusion.

UofL’s record falls to 16-7 overall and 6-4 in the Atlantic Coast Conference, slipping from second to sixth in league play during the week. A chance to get back on track, with Syracuse visiting Monday at 7 p.m.

Find Snider if it’s a nail biter at the end. Please.