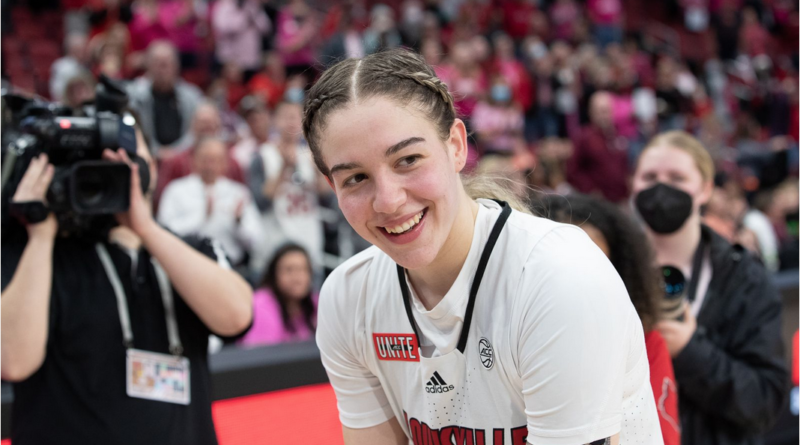 Senior  Day 2022 for the University of Louisville women’s basketball team, time to say goodbye to Kianna Smith, Chelsie Hall and Emily Engstler in the final game of the regular season.  The three seniors would combine for 34 points, 19 rebounds, four assists and six steals in a 70-56 romp over Virginia Tech in front of 10,294 fans at the KFC Yum! Center.

Engstler would have one of her best games in her collegiate career, contributing a grand total of 19 points and 15 rebounds. She wanted to send a signal that UofL was back following a surprising one-point loss to North Carolina on Thursday.  ”It’s just like making a mistake in life,” she said. ”Your reaction is what really matters, and I think we react really well to close games like that, losses. I think we do a good job of coming back in the next game and getting our passion back.”

The Hokies were led by Elizabeth Kitley led the Hokies with 21 points and 13 rebounds. She made seven-of-12 shots, but her teammates were just 10-of-31.

It was the kind of win Louisville needed, largely because the team’s defensive prowess. The Cardinals forced one of the conference’s best ball-handling teams into 14 turnovers, scoring 11 points off of Virginia Tech miscues.

”We scrambled defensively like we have in the past, and we’ve got to get back to it,” he said. ”How we played Michigan here at home, Kentucky, at UConn. You got to scramble. We’re a really good basketball team. I’ve said I do think we are a good enough team to get to the Final Four, but we’re also good enough to get beat the second round here. And it’s a fine line.”

One thought on “Farewell to Kianna Smith, Chelsie Hall and Emily Engstler”