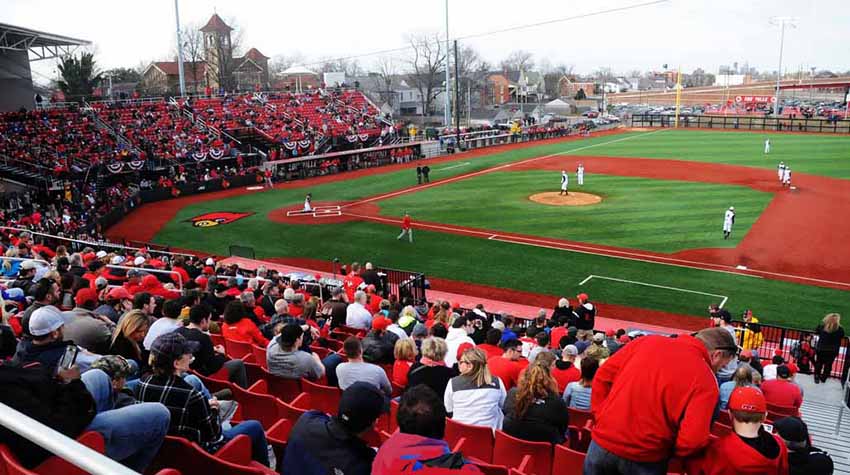 Budweiser in hand, I’m mingling amongst the rag-tag band of pedestrians assembled along the warning track at Jim Patterson Stadium. We don’t know each other and come from walks of life as different as they are disconnected, but a distinct commonality make us a we on this brisk Saturday morning: we’re all Cardinal fans, and all of us have foregone the other endless possibilities that Possibility City lends to its citizens on weekends to watch the University of Louisville play baseball today.

I remember when I started going to UofL baseball games. I was still an undergraduate student at the time. The stadium was nice and new, the beer was cold, and sold, the hot dogs were warm and, on the right night, dirt cheap, and a valid student ID doubled as a voucher for general admission: glass half full, students got free tickets, glass half empty, renting a seat at Jim Patterson for an afternoon ran me around five grand. But that’s a conversation for another day: the fact of the matter was that I had every reason to go watch the Cards play the great American past time, except, of course, a desire to watch Louisville baseball.

My University was a football powerhouse, a national contender in basketball: baseball was a side show, a season between seasons, an excuse to skip class and drink beer on weekdays with the fiery New England Equestrian girls who, for some reason, saw it fit to hang out with me and my undeserving friends.

Fast forward a decade, and I’m impatiently waiting on an opening pitch with an eagerness normally reserved for a tip or kick off. I study batting practice as furiously as the folks at the Brandeis Building doing bar preparation. I had done some bar preparation of my own at the Granville, which has been a pre-game tradition of mine since the days I enjoyed the company of those infamous horse ladies from Connecticut. Ten years have gone by since this ritual was first inaugurated, and both myself and the baseball team have enjoyed a considerable amount of growth and maturation in that time. I look on as the second baseman for Boston College takes a cut at a fairly decent curve ball, which he rockets foul down the left field line. I’m taken back a couple of Junes ago, when David Olmedo-Barrera sent a similar pitch in a similar direction. A call was subsequently made from a television monitor in Atlanta that could have been decided from a ladder on Third Street, and the Cards’ season was over. The following year, a shocking walk off grand slam was given up by power closer Zach Burdi after loading the bases with a three run lead: once again, what seemed to be a date with postseason destiny became a stunning loss, ending a season defined by excellence and success with a question mark, in lieu of the exclamation point the Cardinal faithful hope for and, at this point, expect.

Some would say that is neither here nor there: with a fresh season comes a fresh start, a chance to wipe the slate clean and begin anew. I propose, however, that while it is not necessarily here, it is, in many ways, still there: a certain bitterness lingers, a chip left upon our collective red and black shoulders, stemming from the feeling of being robbed of a potential championship. What could have been the greatest moment in the history of Cardinal baseball, and one of the defining achievements of the University’s entire athletic program, instead lands us on the wrong side of post-season magic, the wrong side of foul territory, the wrong side of the fence: Cardinal baseball becomes history before it has the chance to be historical. Lately it seems that “postseason tragic” is the appropriate tagline for the Cards.

Focusing on the here, though, here I sit; beer in hand at Jim Patterson, preparing to watch the only remaining lossless team in America. The Louisville Cardinals are number one: the statement is as fresh as it is surreal. I remember, just a few short years ago, when Cardinal baseball was a distraction at best. We used to wait until the game was well underway so my friends who had foregone college, and the five thousand dollar admission to Patterson Stadium that it comes with, wouldn’t have to pay to get it. We’d show up late and leave early. My Dad and I used to do the same thing at football games when I was a child in the nineties: we would listen to the first half on the radio, then drive over to Old Cardinal Stadium, which was not so old at that point, at halftime to watch the remaining portion of the game for free. He used to tell me that, before Howard Schnellenberger resurrected the program, folks used to tailgate until the first quarter began, then go home: the games, he said, were just too painful to watch. Needless to say, though, that the attitude of the fan base regarding both the football and baseball programs has changed significantly. A different culture is beginning to define both sports. Success is no longer a pipe dream, it is now an expectation.

Schnellenberger famously said, “The University of Louisville is on a collision course with the national championship. The only variable is time.” If this statement is applied to Cardinal baseball, and the only factor is, in fact, time, one has to wonder: is Dan McDonnell the greatest common factor? The percentages seem to point in that direction.

McDonnell inherited a team in 2007 that had previously gone 31-29. His teams have since consistently hovered in the 40 plus win category, accruing 50 in last year’s effort while suffering a mere 14 losses. This season has already seen an elevation in the Cardinals’ continually rising star: “Monday’s number one ranking raises the bar a little higher for a program that has made a tradition out of contending for conference championships and making deep NCAA runs.”  Is it, then, McDonnell, and the Cardinals’, time? Is that what being No. 1, for the first time in the history of UofL baseball, meant?

Here are some rankings that cannot be disputed: through the past weekend, the Cards were number two in earned run average, at 1.75, number three in team batting average, at .344, and number seven in fielding percentage, at .954. Couple that with the statistics of their star player, who just retired fifteen batters in a game, has a .5 ERA, and the best batting percentage in the nation (.584), and the notion of the University of Louisville being on a collision course with a trophy from Omaha seems not only plausible, but also possible: even probable. A No. 1 ranking is a symbol and, in the spastic world of collegiate baseball rankings, a shaky symbol at best.

To fully cement itself as a sacred cow of college baseball, as a program whose name is synonymous with success and dynasty, McDonnell has to bring home a championship trophy. Winning the College World Series is a feat that validates a program in the way that only a championship can. While the Cardinals are not yet sacred cows of College baseball, they are still, undeniably, no bull.

Matt Osbourn is a Master's Degree student at UofL, having completed his undergraduate studies in 2013, with Bachelor's Degrees in Fine Arts, English, and Humanities. His hero is Hunter S. Thompson and anybody that knows him will attest to the fact that he lives his life in step with the Gonzo model.