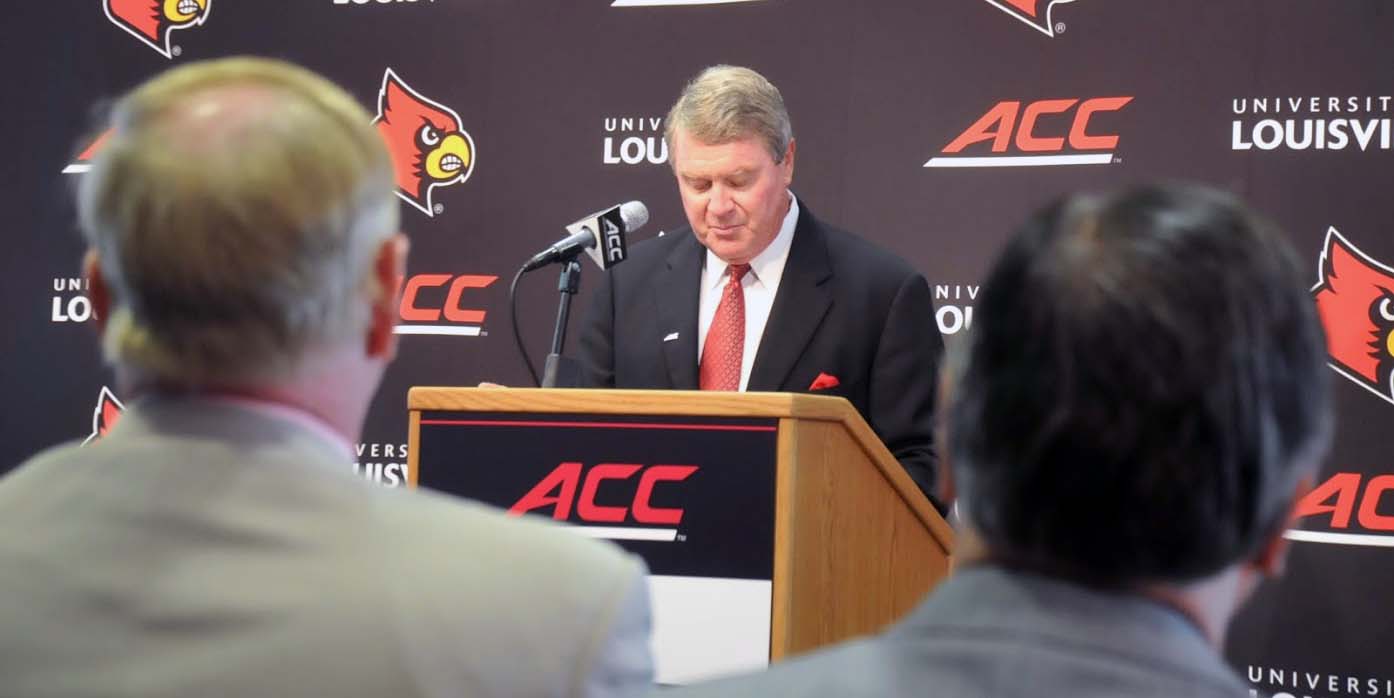 Tom Jurich may have done his job too well at the University of Louisville, helping to transform a sleepy urban school into a dynamic university campus. Also making it a target for at least one business magnate, giving millions to the school on one hand while questioning the motives of UofL leadership on the other.

Jurich arrived as UofL Athletic Director in 1997, and under this leadership, the program enjoyed an era of growth unrivaled in the University’s history.  Creating a plethora of new athletic facilities while claiming championships in three different conferences and thriving on a national stage.

His football hires would lead UofL to major BCS wins, including the Orange and Sugar bowls, and numerous top 20 finishes. UofL would return from obscurity in college basketball to national prominence, including four final fours, and a national championship in 2013. Baseball, soccer and women’s basketball were ranked among the top 10 annually. The swimming program well represented on Olympic teams.

Easily one of the most popular individuals in the Louisville area, Jurich used his popularity and the power that came with it to promote the school. A small group of individuals accused him of using bullying tactics but, if so, it was on rare occasions, most likely to overcome impediments to UofL’s growth.

While all these things were happening, UofL was becoming the most dynamic institution in the community, with prestige and influence at all-time highs. As great as that was for the school, the success was creating some resentment from some in the development community. Some believing they were competing at a disadvantage against a public institution. Including some people on the Board of Trustees.

Some key members of some old money families were also reported to becoming resentful of the school’s growth, as well as some of the nouveau riche, the new upstarts wanting to have their say. Some in elite circles purportedly wanting to get rid of President Jim Ramsey in favor of Matthew Barzun, former U.S. ambassador to Great Britain with family ties to old Louisville money.

Emily Bingham, daughter of former newspaper publisher Barry Bingham, Jr., joining forces in opposition to Ramsey as well. Some suspect they were using their political clout in Frankfort and their influence with the Courier-Journal in successful attempts to skewer Ramsey and to embarrass the school at every opportunity.

The inevitable result was the former Board of Trustees becoming factionalized and dysfunctional. Governor Matt Bevin would appoint a totally new board after Ramsey sought his help.  But Ramsey’s efforts may have backfired with Bevin’s selection of new trustees, one of their first acts removing Ramsey from office.

That was probably the beginning of the end for Jurich, who on the day following Ramsey’s ouster celebrated the opening of the $17 million Thornton’s Academic Center on the south end of Papa John’s Cardinal Stadium. Ramsey had trusted Jurich implicitly, giving him total autonomy, and suddenly Ramsey was gone.

Among the new trustees was John Schnatter, whose company’s name had adorned the stadium from the beginning. Over the years, Schnatter had become more demanding, wanting to make personal appearances, driving his souped-up Camaro, engine roaring, into the end zone at half times, passing out pizzas in the stands. He even demanded that his company’s name be gaudily painted in giant letters on the roof of Papa John’s Cardinal Stadium.

Schnatter, it was suspected, was not happy that the parent company of a competitor had its name on the KFC Yum! Center where UofL plays basketball. The company that owns Pizza Hut also has its name on the UofL basketball practice center on Belknap Campus.

He also had argued from the beginning against the location of the downtown arena on the riverfront, siding with leading businessman David Jones, Sr., that the best location was the water company site. Having the name of a competitor wind up on the arena in that exact location had to be even more bothersome.

By some reports, Schnatter and Jurich had had as little to do with each other as possible. The fundraising for the latest expansion of Papa John’s Cardinal Stadium was so successful that a contribution wasn’t sought from Schnatter for the north end zone addition.

Schnatter, meanwhile, always making a big show of arriving at the stadium in his helicopter, usually late, several minutes after kickoff, circling the stadium before landing near where the old silos stood. He reportedly never received a go-ahead for a closer landing spot to the stadium but he was attracting attention.

Some suspect the real problems in the athletic department were a figment of Schnatter’s imagination. That he wanted more recognition and respect for all the dollars he had contributed to athletics and the school. He never indicated what his real beef was with Tom Jurich.

We will never know if Governor Bevin was aware of Schnatter’s concerns when he appointed him to the new board. It may have seemed like a logical choice at the time, with Schnatter having donated almost $25 million to UofL academics and athletics. One has to wonder, however, if the appointment was a major mistake on the Administration’s part, unnecessarily adding to the chaos at the school.

Despite Jurich’s successes, his fate was sealed when the Justice Department suddenly became interested in the world of college basketball recruiting, leading to quick suspensions of him and Coach Rick Pitino. That would give their detractors all the cover they needed to get rid of them.

All of the enormous accomplishments of Jurich over 20 years not counting for much. The board hadn’t been a part of the success, and lacked perspective. It did, unfortunately, include one of the school’s wealthiest contributors not happy with the athletic director.

One has been told that Schnatter is not the wise acre that he comes off as in board meetings, that he’s a smart individual who didn’t luck into becoming a billionaire. He has yet to prove, however, that he has the best interests of the school in mind, with his seemingly wild accusations about a program that had come so far under Jurich.

Earning the respect and gratitude of people passionate about the University of Louisville will not come easily for Schnatter. Many of UofL’s fans and supporters are hurting and angry right now, apprehensive about the future with Tom Jurich no longer around.

Leadership is about preparing for the future, not laying waste to the past.