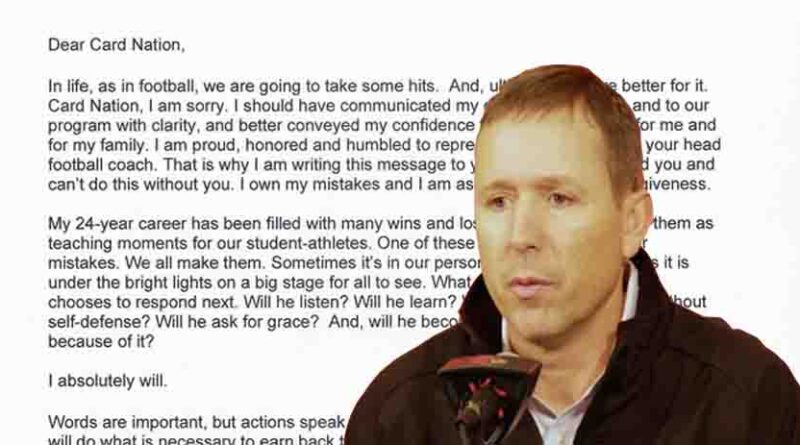 Scott Satterfield is in a much better place with University of Louisville football fans today.  Apologizing for some misdirection.

Imagine a college football coach having a conversation with another school about their head coaching job. Two weeks after telling fans of his current program that he was not interested in moving. Meeting with another school without telling his athletic director. Coming back empty-handed after not being offered the other job.

Unfortunately, college football coaches do it all the time. Something about the job, the personalities involved, the road to prominence in NCAA football. Rarely can fans be comfortable when their coach is being pursued by other programs.

What makes this case different is that Satterfield has actually apologized to UofL fans for his deception. College football coaches never, ever apologize for chasing other jobs, rarely giving any explanation to supporters of their current schools.

In a letter emailed Thursday to Louisville fans, Satterfield said he had a “conversation” with the Gamecocks administration about their job opening despite not being interested in the job. “I own my mistakes and I am asking today for your forgiveness,” he wrote. “In the days, weeks, and months ahead I will do what is necessary to earn back the trust and support of each and every one of you.”

One suspects that the primary reason Satterfield bothered to interview with South Carolina was at the urging of super agent Jimmy Sexton. He wasn’t doing Satterfield any favors, putting him on defensive with his boss Vince Tyra at UofL.  The Gamecocks hired Shane Beamer the very next day.

UofL fans have been through the likes of John L. Smith, Charlie Strong and Bobby Petrino, all swearing allegiance to Louisville before leaving for other jobs. Petrino leaving for the pros after his first stint  after flirting with numerous other programs. Losing his senses during his second stint. So forgive Louisville fans if they still have reservations about anything a college football coach says.

From our perspective, it’s hard to understand why coaches fail to realize how good they could have it at UofL. The university has consistently shown that it will continue to invest in the football program, having expanded Cardinal Stadium twice since it opened in 2017. Increasing capacity from 42,000 to 55,000 in 2009 to 62,000 in 2019. Petrino was among the best paid coaches in football, earning $3.9 million when he was fired two years ago.

Without getting into a laundry list, none of the coaches who left Louisville, including Howard Schnellenberger for Oklahoma in 1993, never accomplished anything. Their careers have always gone south within a couple of years after leaving the Cardinals. UofL fans are a hardy lot, having gone through some tough sledding in the last decade. They will embrace a coach who has the same goals they have for the football program, who recognizes the love and support of the university and the fan base, and wants to be here.

Why consider leaving for a more prestigious program when one has many of the resources available to build one for themselves. Young, aspiring football coaches will never get the credit for building programs at schools like Texas, Michigan, Ohio State, etc. The best they can do is maintain what others have already accomplished. Even that would only last for a while, or until one has a couple of down seasons and is headed for the door.  If Satterfield’s goal is to become one of the game’s great coaches, there are few better places to achieve the goal than where he is right now.