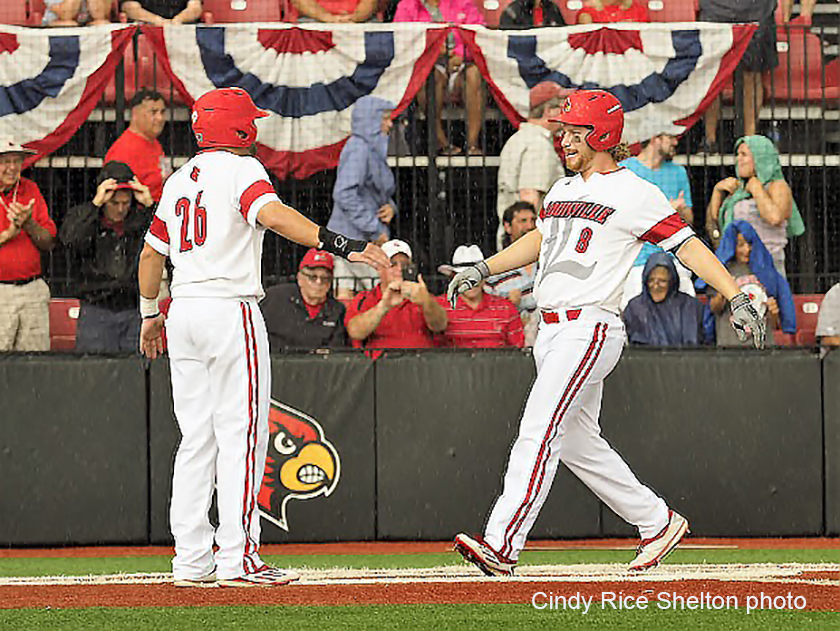 The sight of Blake Tiberi greeting Danny Rosenbaum at home plate is a welcome one for University of Louisville baseball fans, occurring twice on Saturday in UofL’s 15-3 romp over Ohio State.

Rosenbaum had homered and homered again, driving Tiberi across the plate in the third and one more time in the fourth inning.

The Louisville senior would come that close — within about three feet of the left field fence — of doing it still again in the fifth inning.

Batting seventh in the lineup, Rosenbaum is hitting at a .289 clip.  More than a third of his 55 hits this season have been for extra bases.  He now has 10 home runs, 12 doubles and a triple.

Louisville would bat around in third inning, burning Ohio State pitchers for eight hits and eight runs, taking a 10-0 lead in the third, increasing it to 14-0 through the fifth.

Brendan McKay shaking some recent doldrums, putting his pitching and hitting dips behind him, earning his 12th win against three losses.

Brendan set the offensive tone early with a towering two-run home run over the center field fence in the first inning.  Two hits on the day, driving in three runs. On the mound, he was denying the Buckeyes any glimpse of home plate and giving up only only three hits through his five and two-third innings.

Logan Taylor, batting ninth in the lineup, had three hits, including a double, and three runs batted in. Top of the order, bottom of the order, no place to relax for opposing pitchers on Saturday.

This is the default gallery type template, located in:
/home/uoflspr0/public_html/wp-content/plugins/nextgen-gallery/products/photocrati_nextgen/modules/nextgen_gallery_display/templates/index.php.

If you're seeing this, it's because the gallery type you selected has not provided a template of it's own.