The reaction of University of Louisville football fans was almost unanimous when Ron Cooper was announced in 1994 as the successor to Howard Schnellenberger who had left a few weeks earlier for the Oklahoma head job. 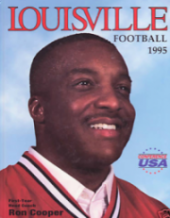 Cooper was coming from Eastern Michigan where he had managed only a 7-13 won-lost record in two seasons at Eastern Michigan and two seventh-place finishes in the Midwest Athletic Conference (MAC). His only claim to any success was that he had previously been a defensive assistant at Notre Dame.

Did you say Notre Dame?

The Irish connection impressed the search committee. But what impressed members the most was Cooper’s optimism. “He was one of the last candidates to be interviewed,” recalls Bill Olsen, former athletic director. “He came and in swept them off their feet with his outgoing personality and confidence.”

He coached at Notre Dame and he’s promising a winner. Wow. Wasn’t able to produce at Eastern Michigan but Louisville was a different animal, building a new football stadium. Not much to go on but Cooper would get the job.

Anyone with much experience with committees knows the smaller they are the better. With too many members, everybody’s in charge and nobody’s in charge. The search committee was unusually large, consisting of 23 people — gigantic by today’s standard at U of L where Tom Jurich makes the decisions.

“Coaching searches are difficult at best,” says Olsen. “The committee was so large it was a challenge to protect the identities of the candidates. Coaching searches are sensitive because people already have jobs. But every time  a name or two was mentioned, Russ Brown would have a story about it in the Courier-Journal the next day.”

Cooper could manage only a disappointing 13-20 won-lost record, culminating in a 1-10 season his last year. All the while promising future greatness before accepting an offer of $1 million to pursue other interests after three seasons.

Among the other candidates pursued were Jim Tressel, recently ousted at Ohio State University, who was paying his dues at Youngstown State at the time. “Tressel never actually interviewed but we were interested in him,” said Olsen.

Another coach was Jim Caldwell, then at Wake Forest and now the head coach of the NFL Indianapolis Colts. “He told he wished he had know about the Louisville job before taking the Wake Forest position,” said Olsen. Another person of interest was Jim Donnan, then at Marshall, who later coached at Georgia and a recent ESPN analyst.