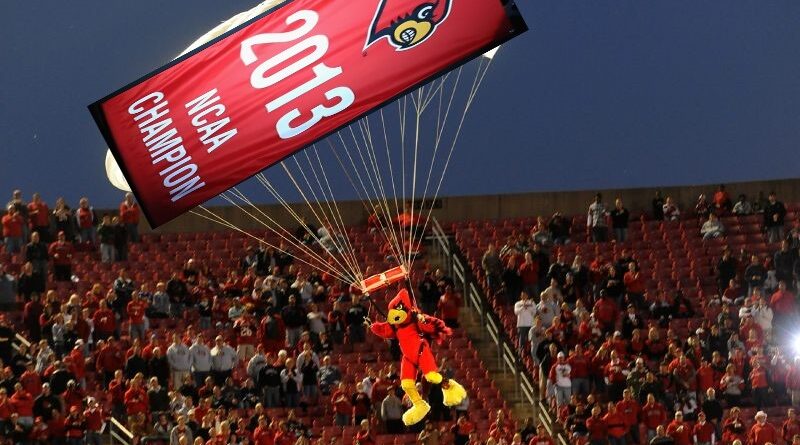 A welcome sight at Cardinal Stadium on Saturday would be return of UofL's 2013 NCAA championship banner (Creative by Steve Springer with admiration to the original photographer).
Football
Steve Springer 3 min read

There’s been quite a bit of confusion and criticism about why University of Louisville fans are trending about making a legitimate attempt to bring back the 2013 National Championship banner to the KFC YUM! Center rafters. The critical consensus, generally from the east and from whatever website Pat Forde is working for nowadays, is that Card fans are so-called scandal-fatigued that they don’t even remember that the banner came down in the first place.

Look. There is no doubt that over the course of what seems like the last forever, there were some things that went down that shouldn’t have.

Clearly, Andre McGee should have never been given the responsibility he had. There were some unscrupulous things that went on in Minardi Hall four score ago. Those things were so bad, I’ll even go out on a limb as to say they were as bad as some of the things that transpire on campuses all over the country at times when it comes to underbelly of college athletics recruiting, campus life, and the intersection of the two.

No one is exonerating #33. Should’ve never. McGee and his statistics should be the only thing vacated from the UofL record books. Take McGee and throw him in the show-cause dumpster with the rest of the scumbag coaches that pull that kind of reprehensible repugnance. Put all the conspiracy theories you want to out there as to how Powell was able to publish a book from a piece of scrap paper. I know I have my thoughts on the journalistic miracle. 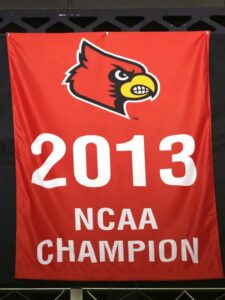 What happened after that is where the rabbit hole morphed into a black hole.

After the whole ordeal was sorted out between UofL, the NCAA, and the rest of the world thanks to click-thirsty negativity-entrepreneurs, the Cardinals’ championship hardware was supposedly erased off the face of the earth. The NCAA in all their wisdom dropped an unprecedented, morally repugnant punishment on Floyd Street and Cardnation like never before seen. Thanks Carol Cartwright.

The banner had to come down.

Fast forward to 2017, when an FBI Investigation was announced into the shady realm and Omerta of  college athletics recruiting. The feds had their playbook. The subsequent investigation led back to UofL’s doorstep thanks to the Bowen Family and the Three-Stripe Life.

The NCAA then did what the NCAA does (did) best.

They try to drop their biased hammer on UofL again. When the whole landscape of college athletic recruiting kept getting shadier and shadier, then completely negated when Name Image Likeness came on the scene, here was UofL still caught in the crosshairs, like a motorist getting sentenced to hard time for expired registration as the cop writes the ticket in between cars doing donuts on the Watterson Expressway.

Unbeknownst at the time, UofL’s white knight was born from four little letters in August of 2018. The Independent Accountability Resolution Process (IARP) was formed from suggestion by the Commission on College Basketball, chaired by Condoleezza Rice, a former United States Secretary of State.

This committee finally put the nail in the coffin of the ridiculously decrepit process to how the NCAA reviews and punishes schools with hearsay and hearsay upon hearsay that are guilty until proven innocent. Yesterday, the IARP exonerated UofL, former head coach Rick Pitino and All-Universe Hall of Fame Tom Jurich. Justice was finally served.

Now, for why you’re here.

The uproar from the 502 is legit. It’s been somewhat stifled for quite a while because it had to be. Going by past precedent, the NCAA has always had it out for UofL compared to {name your preferentially treated cash cows here}. There was no feasible way that athletic directors Jurich, Tyra, and Heird could have pursued any avenue for recompense before the IARP came down with their edict.

The IARP was an unknown. It was their way or nothing, sans legal litigation. Don’t play with fire. Don’t rock the boat. Now that the NCAA’s investigation was, for all intents and purposes, deemed basically a sham (sorry Pat), the voices from the collective fanbase can be heard.

Now that both justice and time has been served, hear this: hang the banner.

One thought on “Why Rehang The UofL Banner? Some Cardinal clarity”