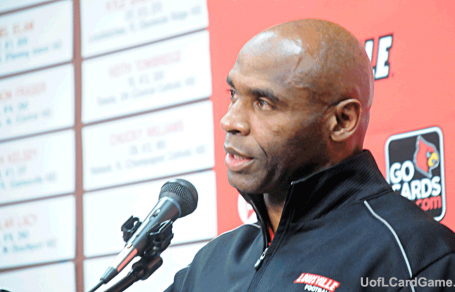 Those are the things Charlie Strong says are critical to success when his staff is recruiting, putting an extra emphasis on character. He says the University of Louisville football program got all those things in the 17 individuals in the 2013 class. “These are young men who want to be a part of something special,” he said.

For a while at least, Strong can finally look back at what his team accomplished in the Sugar Bowl. “I really didn’t have time to celebrate,” he said. “We had to hit the road recruiting right away. We had to keep moving, there wasn’t much time to reflect on things.”

The prize catch, of course, is James Quick, the wide receiver from Trinity. “You just look at his athletic ability and what he can do offensively. Any time he touches the ball, he can just make things happen. He’s going to be a great contributor wherever we use him. He’s a wide receiver but he’s also a guy you can move around.  What you also look at his family, his father played here, an outstanding family. They did a great job of raising him.”

Strong also praised quarterback Kyle Bolin’s leadership qualities, noting that he expects the Lexington Catholic product to bounce back from the ACL injury that cut short his 2012 season. He said Bolin was also helpful in the recruiting process. “I was getting calls from from guys I didn’t know who would tell me that ‘Kyle gave me your number’. ”

Chandler Bridges (Flowery Branch, Ga.) is a solid addition on the offensive line, while Cameron Fraser (Phenix, Ala.) will also add to that position. Skylar Lacy (Indianapolis, Ind.) is the third offensive lineman to sign with the Cardinals.

Keith Towbridge (Toledo, Ohio) is an athletic player who will gives UofL a big receiving target at tight end.

The coach is relieved the recruiting process is over for a while. “It’s a good day because you build your program, add to what you already have. It is a process. You’re in and out of airports, you’re talking to this young man, you’re talking to that young man. You do get tired of it. Just want to get it over with. Now I can just go work with my team.”

He says UofL is still working on obtaining a marquee game against a major opponent. “We’ll just have to see who wants to come in here. Do you know anyone who would like to play us?”

2 thoughts on “Recruiting over, Charlie Strong ready to get back to football”