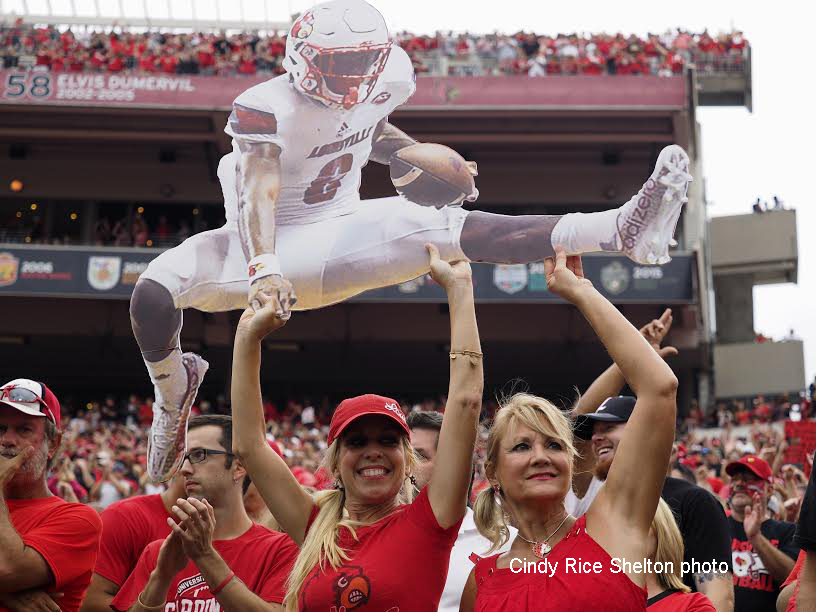 At halftime Tom Jurich was heard saying, “I just hope we can beat them.” That was with the University of Louisville football team leading Florida State 35-10 after the first 30 minutes.

He had reason to be concerned, given the frequency with Florida State has rallied in the second half to win games in recent years. Two seasons ago, the Seminoles overcame a 21-7 deficit at the half to win 42-31 on the Cardinals’ home field.

For UofL fans at Papa John’s Cardinal Stadium on Saturday, the Cardinals couldn’t score too many touchdowns. No lead over Florida State was considered safe. They could almost relax after a third quarter Saturday in which UofL would hold Seminoles scoreless while tacking on 14 more points.

An all-time record crowd of 55,642 at Papa John’s Cardinal Stadium would witness Louisville’s 63-20 win over Florida State, eclipsing the previous attendance record of 55,414 which was set during the UofL-Florida State game in 2014.

Louisville would lead by 53 points at one point before pulling its starters in the fourth quarter. One of the most significant victories in the history of the program, serving notice to the college football world that University of Louisville football is a national contender. One of those milestone victories that can elevate the perception of a school as a power football program, as opposed to being “another basketball school.”

Another unbelievable performance by Lamar Jackson, who has quickly captured the attention of the college football world with his lightning speed, unnatural reflexes and super arm strength.  He would rush for four touchdowns — on runs of 2, 14, 1 and 47 yards — and make a 4-yard touchdown pass to Jaylen Smith, raising his touchdown total to 18 for the season.

Jackson is obviously a special talent, the kind that comes rarely comes along, with the unique ability to take a football program to another level. Never more obvious than on a day when the home crowd would honor the memory of the greatest, the late Muhammad Ali.

Brandon Radcliff with one of his best performance, racking up 118 yards and a touchdown. Jeremy Smith would add two TDs. Great day for Jaire Alexander, too, with two 60-plus-yard punt returns – including a 69-yarder for a touchdown and a fumble recovery leading to another.

Tom Jurich knows how lucky he is to have a Lamar Jackson around here, giving Jackson a rare bear hug on the sideline on his way to the coin toss before the game.