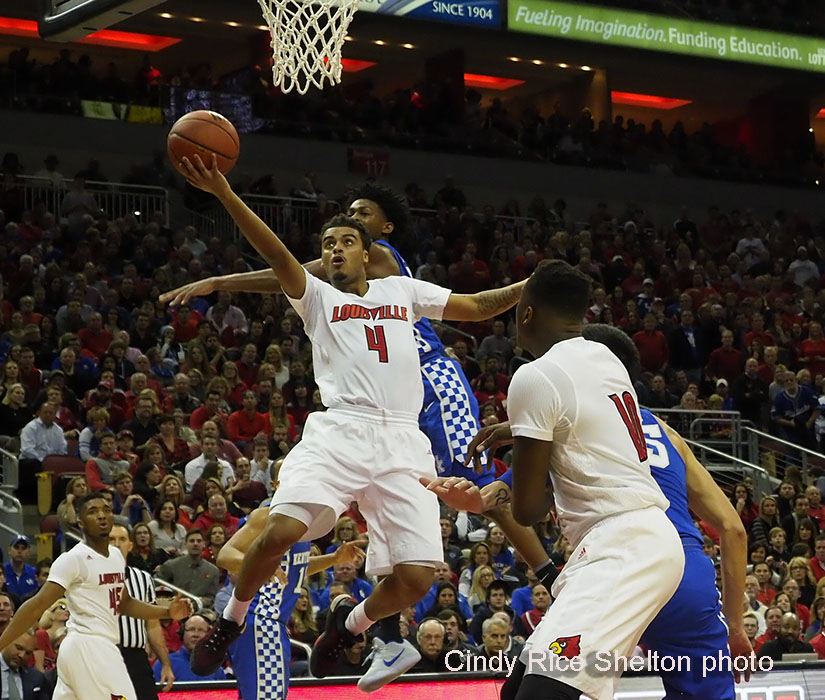 A setting custom made for a local kid to have the game of his college career. A culmination of desire and effort for a youngster in one of Rick Pitino’s summer camps a decade ago.

No doubt Quentin Snider had visions of something like this back in the old Cardinal Arena on Floyd Street. Then as now, paying rapt attention to Pitino’s every word,  wanting to be a difference maker.

Not the fastest guard Pitino has ever coached, pretty slow actually, and not blessed with long arms or quick hands. He is, however, blessed with a great basketball I.Q. and that will take a player a long way.

One of two hometown players on the UofL roster, Snider is keenly aware of how much this the rivalry against UK means to Pitino, to the community and to him personally. Torturous for any UofL partisan, enduring four losses to UK in three seasons, eight in the last nine games.

Snider, however, was in a position to personally intervene, take things in his own hands. And he would do just that, turning in a solid 37 minutes of action, scoring 13 points in the first half and 9 more in the second half to lead all scorers with 22 points.

He was also plowing into the boards, the 6-foot-1, 175-pound lightweight junior pulling down a career high six rebounds. On top of that, he was handing out five assists and making three steals.

A quiet youngster, leading by example, exuding confidence, never tiring, playing inspired basketball, not taking no for an answer. Playing a-star-is-born game that often occurs during these rivalry games, showing the way, getting it done, the vision of that 73-70 win on the scoreboard seared in his memory forever.

“Growing up as a kid, you just have Louisville in your heart,” said Snider. “When you go into games and you’re from here, you’re playing for the city and your friends and your family.”

Taking charge, getting it done for a grateful hometown.

— Donovan Mitchell sinking two free throws at the nine-second mark to give UofL a three-point cushion, topping off a game in which he would wind up with 13 points, four rebounds and an assist.

— Deng Adel finding his game when UofL most needed it from him, making good on five of 10 field goal attempts, including two of three 3-point attempts, for a total of 18 points. Six rebounds and a couple of assists as well.

— Jaylen Johnson with an offensive rebound UofL had to have at the 20-sec0nd mark, sticking the ball in the basket to give the Cardinals a four-point lead. That had to happen right then or never. Big night for him, contributing 14 big points and six rebounds in a game on the big stage.

The win couldn’t have come at a better time, serving notice that UofL will again be a serious participant in the bitter rivalry.