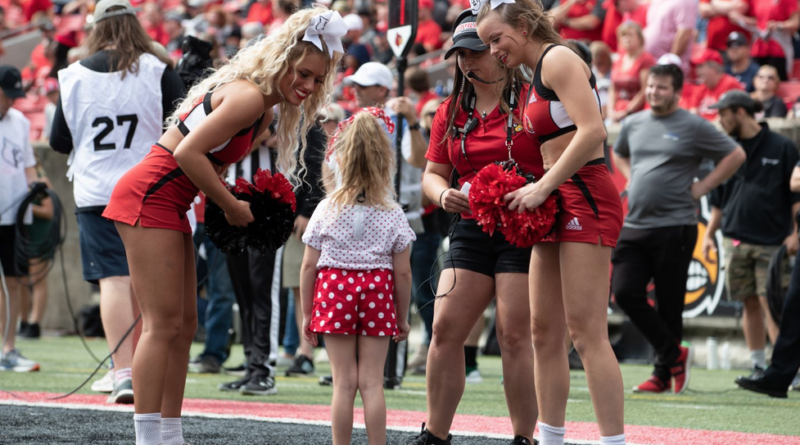 A future UofL cheerleader gets together the current cast for tips on her techniques (Mike DeZarn photo).
Football
Ed Peak 1 min read

When you play disciplined football, don’t turn the ball over or make silly mistakes and penalties a dominating performance is possible. The University of Louisville did just that in last weekend’s thrashing of South Florida.

“It proves that if you go out and don’t beat yourselves, you have a great opportunity,” said Coach Scott Satterfield following the win. “We came out and dominated the game. I thought our guys were focused and played that way. It proved we can do it. With commitment each and every week to come out and stay focused on the task at hand. When we are like that, then it is more about us than who we are playing.”

Quarterback Malik Cunningham had a “Malik”kind of game. The fifth year senior ran for three touchdowns 40, 35 and eight yards while passing for another. He had 113 yards rushing and was 14 of 22 passing for 186 yards.

“I give credit to my teammates for opening up the holes for me and blocking down the field,” said Cunningham. “Without them I couldn’t do I couldn’t do a lot of those things.

The running game produced 283 of the Cards 506 yards. Running backs Trevion Cooley with 75, Tiyon Evans with 51 and Jawhar Jordan with 38.

“It’s a blessing to have those guys behind me,” said Cunningham. “They put in a lot of dirty work that is unseen, so whenever I get a chance to hand off to them I catch myself watching.

“We needed this one bad. It’s the start of something good. We’ve got Boston College next so we got to get back to work.”

Boston College limps into Saturday’s noon kickoff having won one game in four tries The Eagles have scored just 45 points, an average of 15 points a game. Florida State thumped BC 44-14, Saturday night.

The guys in Vegas have made Louisville an 11 point favorite.