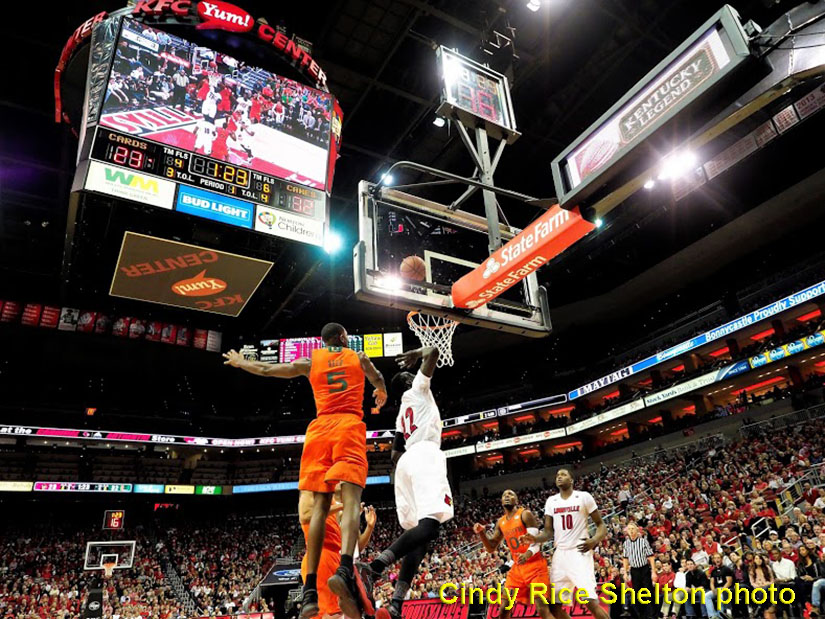 Fortunately for UofL, Jaylen Johnson was around to get the "lunch-pail"buckets, per Rick Pitino (Cindy Rice Shelton photo).
Basketball
Charlie Springer 2 min read

No concern the game does not begin well, Miami jumping out to an 8-0 lead over the University of Louisville. Not to worry, UofL almost back at full strength, with Quentin Snider back, along with Mangok Mathiang and Deng Adel. Happy days are here again.

That was exactly the kind of mentality that concerned Coach Rick Pitino before the game. “I was afraid of that,” he said afterwards. “We had been overachieving so much. Ninety-five to ninety percent of teams lose this game. Miami was the better basketball team, they totally outplayed us in every phase of the game.”

Indeed. The Hurricanes seemed to be scoring almost at will in the first half. “We let them drive by us on straight-line drives,” added the coach. “We didn’t rebound well, we didn’t shoot well and we didn’t pass well.”

Yet Pitino said the game may have been the best of the year character-wise. “When the game was on the line, we did all of the above,” he said. “But we’ve still got a lot of work to do on defense.”

Louisville emerged the 71-66 winner after scoring 13 straight points in the second half. The crushing blow, a three-point dagger followed by a free throw from Adel at the 4:22 mark, giving his team a six-point lead and its largest in the game. Adel would make two out of three 3-point attempts, sharing scoring honors with Donovan Mitchell with 18 points.

Snider would need a little time to get going after missing six games with a hip injury. He would miss all three of his shots in the first half, but hit three of five attempts in the second — including a crucial 3-pointer with 41 seconds remaining.

Jaylen Johnson sometimes missing the easy shots but making the impossible ones, delivering what Pitino called a “lunch-pail” effort with 10 points, eight rebounds, a block and a couple of steals.

Mathiang picking up the slack thankfully as Anas Mahmoud regresses. Anas with three turnovers, zero points and a couple of rebounds while Mangok is collecting seven points and eight rebounds — and three out of four free throw attempts.

The win improves UofL record to 20-5 overall, and 8-4 in the conference, tied for second place before the evening games. Syracuse next, at Syracuse on Monday. One thought on “Snider, Mathiang and Deng back but Louisville defense tardy”