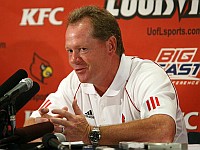 The folks at Western Kentucky University refuse to be irrelevant.

Just when WKU athletics have all but vanished from the public consciousness, the school does the unexpected, pulling the occasional upset in basketball or football.

The latest surprise is the hiring of Bobby Petrino as the head football coach, a move sure to generate lots and lots of press for WKU, most of it negative, but putting Western Kentucky football in the national discussion. That’s apparently what WKU wants most, to be relevant.

Sending messages to Louisville and Lexington that Western Kentucky will be taken seriously in the state, even if requires taking  shortcuts with the hire of someone whom many consider deceitful and unreliable.

Everybody knows what’s going on here, Petrino is using WKU as a crutch to resurrect his career after humiliating himself with all the deception associated with his romantic escapade and deception at Arkansas. None of the big time schools wanted to take a chance on him. Just yet.

Petrino will be the toast of Bowling Green. At least one new red Corvette with all the accessories every year, all he can eat at Verdi’s, free membership at the Crosswinds Golf Course, and passes to the Beech Bend Park & Splash Lagoon.  He will talk about how much he loves the school, the community and his players.

WKU will win more than a few football games, get more TV exposure, and possibly wriggle its way into Conference USA, thanks to Petrino’s presence. But their time in the spotlight will be brief, because Petrino won’t be there long.