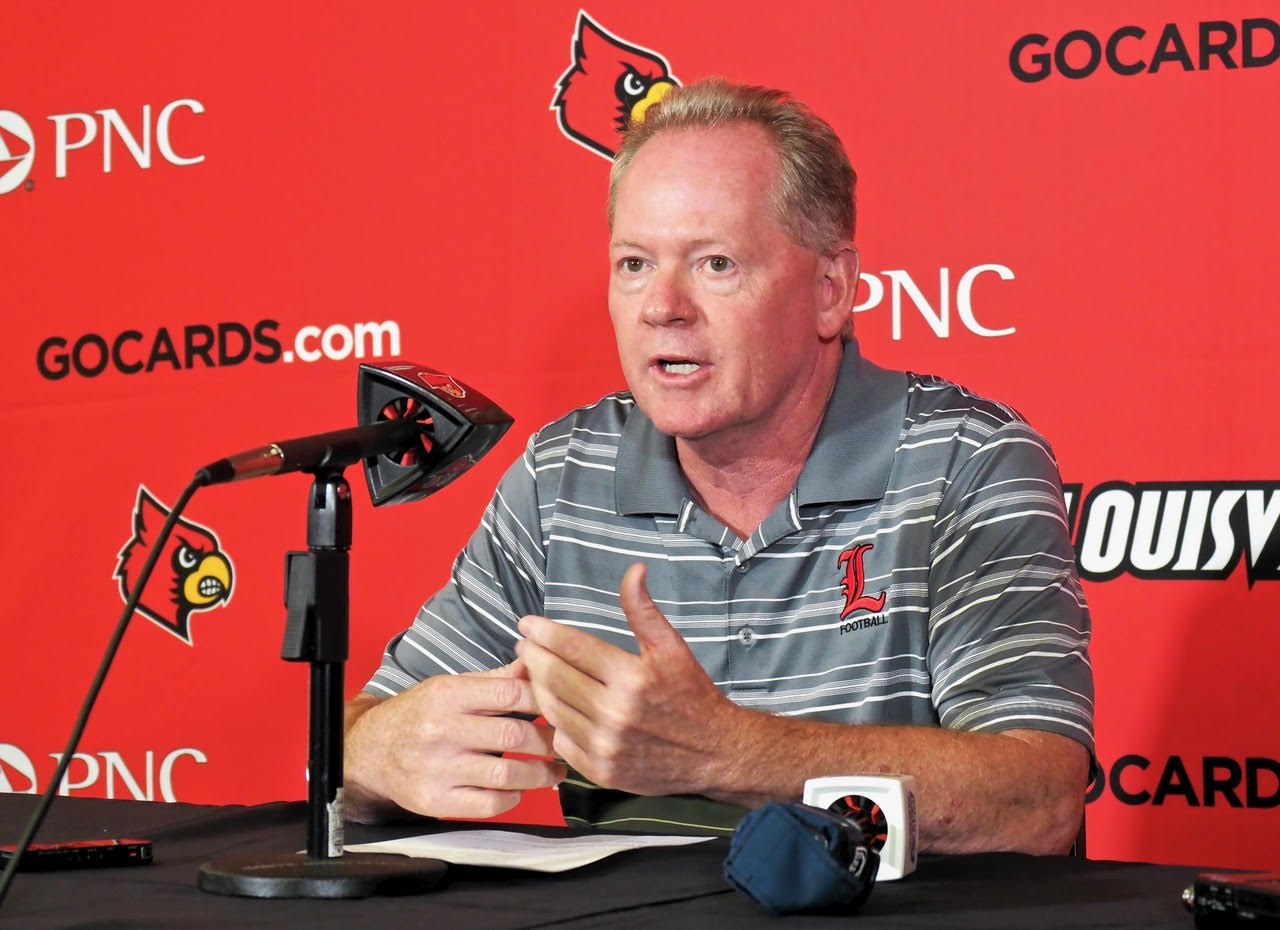 Bobby Petrino is not going to be fired this week or next. Still hard to believe people are already calling for his head.

Petrino’s immediate dismissal is what a sizeable segment of University of Louisville fans is clamoring for, as if an early dismissal would somehow make the season turn out better.  Local sports talk radio jocks, seemingly unaware of his accomplishments, are stirring up the fan base, some of them advocating replacements for Petrino.

Many just want him gone, as soon as possible. Never mind that there’s no one on Petrino’s staff remotely qualified to be head football coach, not even on an interim basis. His staff is conditioned to his brush style, staying out of his way, taking orders, not leading.

One talk show pundit, in a continuing effort to demonize Petrino, suggesting Petrino didn’t have a press conference this week because he didn’t want to face the sports media. The fact is Petrino never has press conferences during bye weeks.

Granted, this season’s Louisville football team is falling fall short of the standards Petrino has set over seven seasons. The offensive line is almost non-existent, the quarterbacks don’t seem to have a clue, and there is no consistency in the passing and running offense.

If by some miracle he is able to turn things around, Petrino will quickly be restored to sainthood status.

Fans who were so joyful when Petrino was rehired at UofL have been drained of enthusiasm during a season when the capacity of Cardinal Stadium was expanded by 6,000 seats to a capacity of 60,000. A glorious venue, the apex of UofL athletic facilities, but now the scene of one of the most disappointing failures in the athletic program’s history.

These have been some challenging times for Bobby Petrino. Over the last year or so, he has lost some important people in his life. People who supported him, people he counted for friendship and advice, are gone.

The first loss was Tom Jurich, one of his best friends, who was fired following the latest UofL basketball trauma in 2017. Jurich was the man who helped Petrino put his life back together after the motorcycle accident and the sex scandal at Arkansas. Jurich not only helped Petrino get back in the coaching business at Western Kentucky University and then signed him to a lavish contract at UofL.

Petrino also lost one of most staunch supporters when his father, Bobby, Sr., passed away at the age of 81 in late July. Bobby, Sr. was the head football coach at Carroll College from 1971 to 1998. Petrino, along with his brother Paul, both played quarterback at Carroll, running their father’s option offense. Bobby, Sr. spent much of his time in Louisville, attending every game, making many practices, making most coaching shows. He was always around the program.

There was also the loss of a former Heisman Trophy winner who made offense look so easy. But Petrino said the offense would be even better without Lamar Jackson. Everyone believed Petrino, only to be disappointed.

Not so long ago Petrino was practically worshipped by fans, considered an offensive genius, courted by some traditional football programs. Now that he’s lost four of his last six games, Petrino is toxic, facing an onslaught from the many of the same people who thought he could do no wrong. Small wonder coaches tend to stay at arm’s length with media and fans.

The 57-year-old Petrino is still UofL’s second all-time winningest coach with an overall record of 77 wins and 31 losses. The coach who won a BCS trophy at the Orange Bowl in 2007, a game that attracted more than 35,000 fans to Miami. He ranks first in program history in conference winning percentage (.653%), home wins  with 40, Associated Press top 25 victories with seven, and AP Top 25 finishes (five).

The biggest obstacle to bringing in some new blood is Petrino’s $14 million buyout, a price few Power 5 teams can afford to pay. The next challenge would be attracting a proven coach who would come with a similar price tag attached. One is looking at some astronomical numbers. Best to wait a while, at least another season, hoping he can turn things around.

Petrino’s current team may very well continue to perform poorly, lose the rest of its games and wind up with a 2-10 record this season. His team may wind up playing in front of half-empty or worse Cardinal Stadium seats. But if by some miracle he is able to turn things around, Petrino would quickly be restored to sainthood status.  Regardless of whether that happens or not, Bobby has earned another season.

5 thoughts on “Petrino getting bum’s rush as expectations plummet”