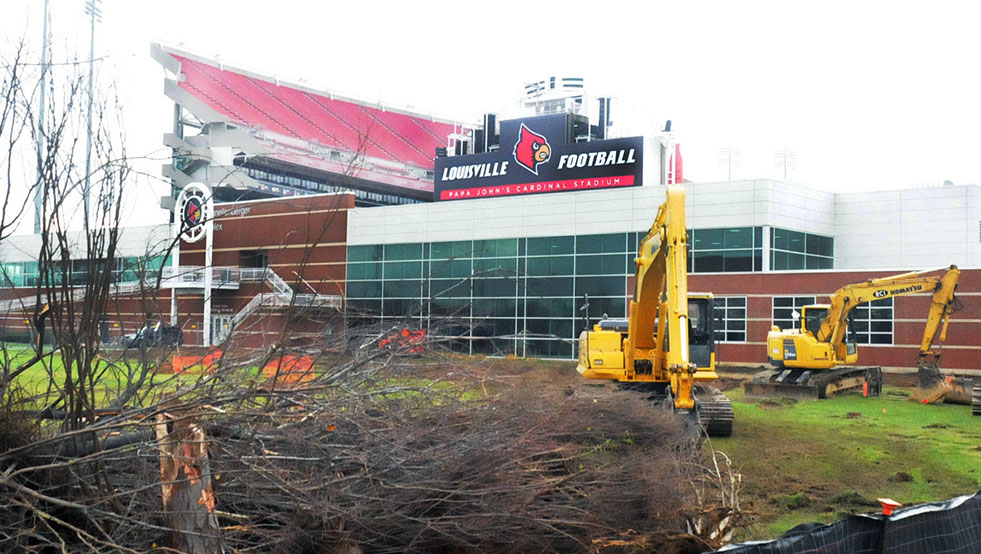 Editor’s Note: The following has been edited to include updated information on Messer Construction.

Most University of Louisville football fans are still attempting to recover from those two bitter losses at the end of the regular season. A disappointing end to what at times held the promise being the best season ever.

The hangover is a natural reaction to some dashed expectations and is only temporarily. Despite the trainwreck at the end, UofL football was in contention for a college football playoff spot for much of the season. Close to competing for a national championship. Sooner or later, fans will draw strength from that fact.

That’s why Tom Jurich is moving ahead with the $55 million expansion plans for Papa John’s Cardinal Stadium, which will include an additional 10,000 seats, including 1,000 club seats, 70 premium boxes and 12 exclusive field-level suites.

Construction crews have already been doing preliminary work on the lawn of the football complex just outside the stadium. Security fencing has been installed, some trees and shrubbery have been removed, and several holes have been dug, apparently for preliminary electrical work.

A Louisville-based unit of Messer Construction, which built the Thornton’s Academic Center for Excellence, has set up a command facility just outside Gate 9 on North side of the stadium.

Sports Information Director Kenny Klein confirmed that the crews began work on Monday, as Jurich had promised back in June when he announced an expected completion date of August 6, 2018. That would be about three weeks before the regular season home opener against Notre Dame.

Klein said the crews are doing preliminary preparatory work. “It will be a while before the heavy cranes arrive,” he said. “But, yes, the stadium expansion project is underway.”