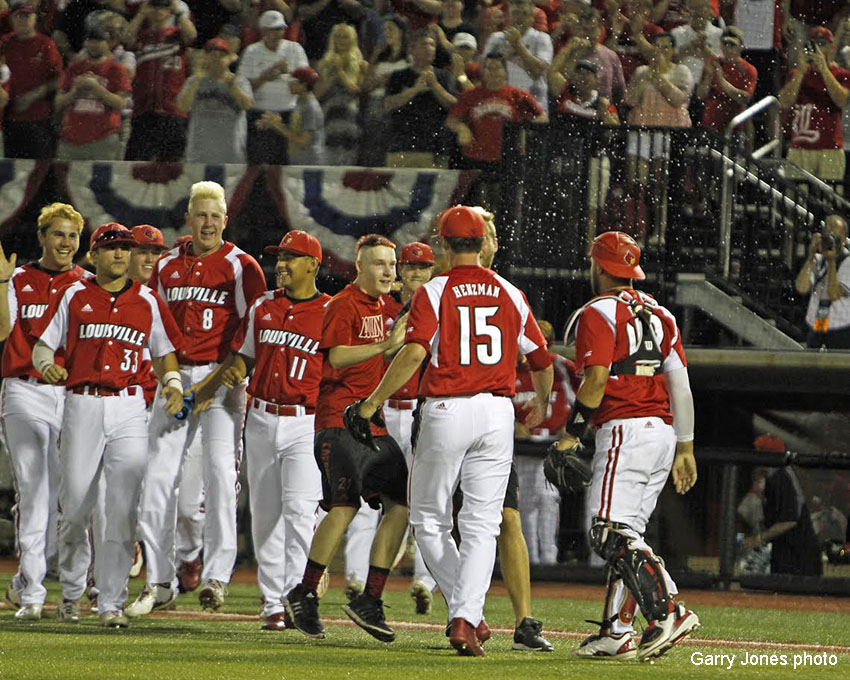 The Cards thanking their fans:

Never give up, never give in, always competing. Don’t play the score, play the game is what UofL Coach Dan McDonnell always says. No lead was safe, the lead changing hands so often.

That was until reliever Lincoln Henzman got the call prematurely to put out the Xavier fire in the seventh inning. Stopping the bleeding, ending the drama, after three runs had been scored, pitching two-and-two-thirds innings of flawless baseball.

Sending UofL to the Super Regional for the seventh Super Regional in 11 years with a dramatic come-from-behind-three-times 8-7 win over a determined Xavier team. The win witnessed by 4,012 fans at Jim Patterson Stadium.

The firepower and the winning runs coming largely coming from the bottom half of the Cardinals lineup.

Josh Stowers putting Louisville back in the lead in the bottom of the seventh with a one-out RBI double hit towards the same spot as earlier three-run home run. Collin Lyman slid home to tie the score, and Stowers would score on a single by Logan Taylor.

Three wins in a row, three hard-fought ones. No one said it was going to be easy, nothing really good ever is. The Louisville Cardinals will be back at Jim Patterson Stadium next weekend, hopefully en route to Omaha.