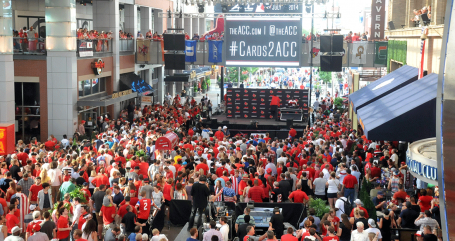 One more celebration for University of Louisville fans, so many of them in recent years, this one maybe the biggest of all, with thousands of fans jammed into almost every square foot of the Fourth Street Live atrium. The monumental occasion this time was UofL’s move to the Atlantic Coast Conference.

Tom Jurich, who had flown in from the Colorado vacation for the day, taking advantage of the opportunity to thank UofL fans for their support, reminding them of the 40,000 who flocked to the Orange Bowl in 2007 and the 30,000 who traveled to the Sugar Bowl in 2013.  The fans support visible in so many ways, from the fans’ role in funding Papa John’s Cardinal Stadium to Jim Patterson Stadium to capacity crowds for football and basketball and many of the Olympic Sports.

People in decision-making positions notice these things, taking them into consideration when weighing the company they want to keep when they are planning for the future. People like John Swofford, the ACC Commissioner, and athletic directors and coaches throughout the conference. Louisville, they decided, would be a great partner in one the most prestigious conferences in America.

Jurich also expressed his appreciation to Swofford for all the ACC’s chief executive has done during the past 18 months to pave the way for Louisville, presenting him with a personalized bottle of Maker’s Mark.

Swofford once again praised UofL’s passionate and growing fan base, the community’s hospitality, and the unparalleled success of the athletic department. And he added, “I’m going to save this bottle for when Louisville wins its first national championship in the ACC conference” to a thunderous roar from Cardinals’ fans.

Football Coach Bobby Petrino was greeted by cheers of “Bobby,” “Bobby” “Bobby,” proclaiming one more time that he was thrilled with the fall schedule. “Our goal is to win a national championship at the University of Louisville,” he said, evoking still another roar.

Petrino also announced a “BLACC OUT” for the opening game again Miami on Sept. 1 and officially unveiled new black uniforms for the game, modeled by Jake Smith and Lorenzo Mauldin for the multitude of admiring fans. Black is obviously back if the fan reaction at the rally will be used to measure their popularity.

Darrell Griffith, a member of the 1980 national championship basketball team, was there, as were Sara Hammond, Wayne Blackshear and Montrezl Harrell, to judge a dunking contest by the ACC mascots. The Cardinal Bird won easily, receiving 10’s from all the judges.

Blackshear promised fans they were going to see “a new Wayne next season.” He did have a different look already, a lean and hungry look that indicated that he’s keeping his “gym rat” promise to Rick Pitino.

Another Louisville party, the end of a perfect day for the University of Louisville, hopefully bringing an end to the nomadic conference-shuffling existence for a long, long time.