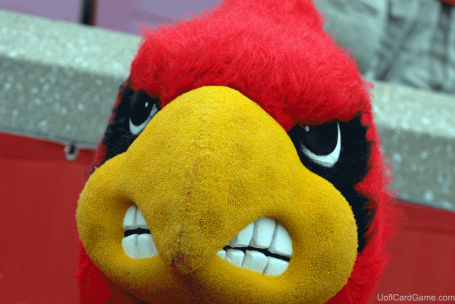 Trying to make sense of a 45-26 beating at Syracuse, hoping it was an aberration, not a trend. Knowing that a previously undefeated team, that wasn’t getting better, now has the full attention of Charlie Strong. Forced to wait another week for the arrival of UConn at Papa John’s Cardinal Stadium.

The closer to the game we get, however, the less UConn will look like a patsy.

Safe to surmise that UConn has largely been taken for granted, with fans looking forward to another nationally-televised showdown at Rutgers. Wanting to atone for the last minute loss in 2006.

The closer to the game we get, however, the less UConn will look like a patsy. The Huskies have a 4-6 won-lost record, with wins over Massachusetts, Maryland, Buffalo and Pittsburgh. They’ve been competitive in every game save one, a 40-10 shellacking by Syracuse.

UConn, which also has an open date this weekend, needs two more wins, as did Syracuse, to become bowl eligible this season. There won’t be any lack of motivation.

Of course, with the possibility of an undefeated season, the Cards had even greater motivation last week. That didn’t go so well did it? But the fact is Louisville still has a shot at a BCS Bowl if it can win the final two games.

We don’t yet know how this team will respond to adversity — or having had its butt kicked royally. It’s time for a defense that has been pushed around all season long to not take it anymore, grow up, make a stand, show some progress, push back, maybe even dominate. This is a Charlie Strong defense after all.

The determining factor may well be whether leadership emerges on the defensive side of the ball. Strong has occasionally alluded to a lack of it on a unit dominated by sophomores and freshmen. He’s got another week to pull it out of them.

Credit Bleacher Report for the video: