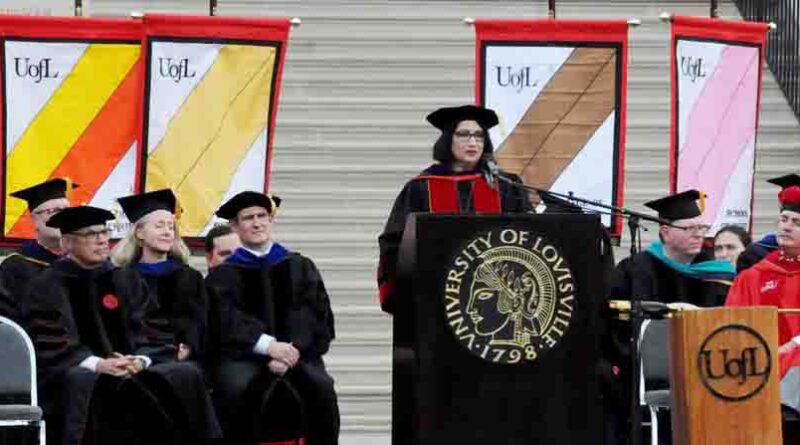 Born and raised in Vizag, India and obtaining undergrad and master’s degrees on another continent probably kept Dr. Neeli Bendapudi safe from the sometimes-vitriolic nature of one of the most heated rivalries in sports.

Not just sports, but the University of Louisville vs. Kentucky rivalry transcends beyond the sports realm and into state politics and the everyday lives of the state’s residents way more than it should.  Neeli never had to listen to kids donned in blue make fun of her favorite Cards teams when they came up short or watched their reactions when the tables were turned.

The issue is relevant because UofL announced last week that Lori Stewart Gonzalez, a UK graduate, has been selected as Executive Vice President and Provost at the University of Louisville. Gonzalez will assume the position as UofL’s provost by April 1, pending approval by the UofL Board of Trustees. So many UK grads in prominent positions on Belknap Campus over the years, the most recent being the dreaded Interim President Greg Postel (now filling in at Toledo).

Hearing the players she looked up to called Blackbirds (or much worse) wasn’t on Neeli’s list of dreads for the day.  She probably never ended up in fisticuffs over the Cards and the Cats.  She assuredly had her own grievances and, of course, there are issues in the world much worse than these.  We can most definitely categorize these as first-world problems.

Moving to America and getting a doctorate from Kansas, maybe she saw some Border War balderdash and poppycock, but that doesn’t equate to the intensity of hoops in the Bluegrass. Tobacco Road fervor may come close, but traditionally doesn’t carry off the basketball to football and beyond in the intensity it does in the Commonwealth. Seeing that she doesn’t seem to have any obvious connections to the near east, she’s probably clean.

She does appear to have UofL’s best interests at heart so far, but as intelligent as she seems to be, some elements of ignorance don’t prevail over the ink on your birth certificate or multitude of diplomas. You just need to have lived them, as is the case of growing up between the Ohio River and Tennessee line, even more in the crossfire of Jefferson County and the rest of the state.

Been trying to think of an analogy, probably not airtight, but best I could think of:

Imagine a dude named Richie that grew up with a kindergarten sweetheart named Kendra He absolutely adored Kendra because she’s all they talked about and he didn’t know any better. She was beloved by all his family members and generations before them. She was the epicenter for all he treasured his whole childhood. She was perfect, beautiful, almost a goddess to him.

Well, Richie grows up, but instead of getting to marry Kendra, his great grandfather Stephen, grandfather Matthew, father Andy, and crazy drunk uncle John, all have business dealings and interests that prompt them to arrange a marriage for Richie to marry Louise, instead of Kendra, for the good of the family. Now, Louise is a pretty gal, just not the childhood dream or sweetheart. Louise cooks really well and puts good meals on the table.

But deep down inside, Richie looooves and longs for Kendra. Sure, he treats Louise right on the surface because he’s either a good husband or wants to appear to be, but deep down he loves Kendra. Heck, he even has a framed picture of her displayed prominently on his office wall. Is it possible for Richie to be a decent, adequate, or even good husband to Louise? Sure it is. Is it possible to question the loyalty? Absolutely. Is it possible this analogy doesn’t fit in this specific case? Sure. But when it happens time and time again, one begins to feel like the odds say otherwise, especially since you know the history of the rivalry and the politics in this state.

The, at most, glaringly obvious, at the least, questionably coincidental, internal and external forces that have sabotaged UofL’s successes over the last few years have a common denominator. Almost all of these nonfictional, factional fractions have a common denominator. A brilliant lady with a PhD in marketing can crunch those numbers. If she hasn’t been indoctrinated into the realism that is the real-life hyperbole of the rivalry in her short time in Louisville, it’s coming.  Next time, it might be that somebody with vested interest wants a Cat in her spot.