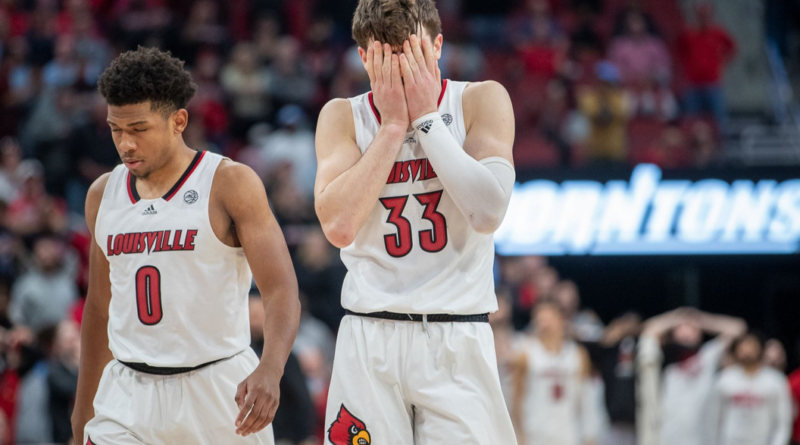 The current version of college basketball does not in any way resemble the way game was envisioned by James Naismith. The game quite often resembles the World Wrestling Federation, especially in the immediate vicinity of the basket. Anything goes these days.

No way to predict which way physical contact will be called by officials, it’s anybody’s guess. Take the call on poor Sydney Curry of the University of Louisville basketball team late in the overtime in Tuesday’s game against North Carolina. Curry viciously elbowed in the Adam’s apple, and pummeled to the floor by NC’s Armando Bacot. Totally out of line. Bacot knew it, Curry knew it, everybody at the KFC Yum! Center knew it.

Everybody except the official, Bill Covington, Jr., who called the foul on Curry, knew it was at least a flagrant foul. Possibly should have been double fouls. But there’s no way to reverse terrible calls, no way at all. Sorry, just the way it is. And don’t ever expect other officials to contradict a fellow official. Doesn’t happen.

Louisville Coach Mike Pegues justifiably enraged, wildly waving his arms, protesting at the top of his lungs, and pounding his fist into the press table. He had had enough. Not that it would do any good. He would be assessed a technical. And he would apologize to his team and the fans later. There are times when one simply cannot be silent.

One of the most raucous games in recent years at the KFC Yum! Center, a game in which Louisville refused to wilt, taking North Carolina into overtime before losing 90-83.

The Louisville players making it known that they, under their new coach, can play just as physically as the next guy. And opponents had better ready to mix it up. These guys are not going to roll over. Except maybe for one suspended player (Malik Williams), they obviously love playing for Pegues. They may be 11-11 overall and 5-7 in the Atlantic Coast Conference but anyone who takes them lightly do so at their own peril.

No fear from El Ellis. The UofL reserve guard keeping the Cardinals in the gamewith a team high 24 points, including five of 11 three-point attempts. He shoots with a confidence so badly needed by this edition of Louisville basketball. Matt Cross with a stellar performance as well, pulling down an amazing 15 rebounds while adding 13 points.

Sydney Curry, of course, patrolling the inside, taking everything North Carolina and giving it right back to the Tar Heels. He saw only 17.21 minutes of playing time but they were grueling minutes, every minute, every second. Ten points and six rebounds.

Not a talented collection of players, some of the shots are bewildering, many of their moves defying fundamental soundness, as slow as turtles getting started. Defying all tenants of Louisville basketball tradition, they have served notice that they will not be pushed around.  Ready to rumble? Have to be in college basketball these days.