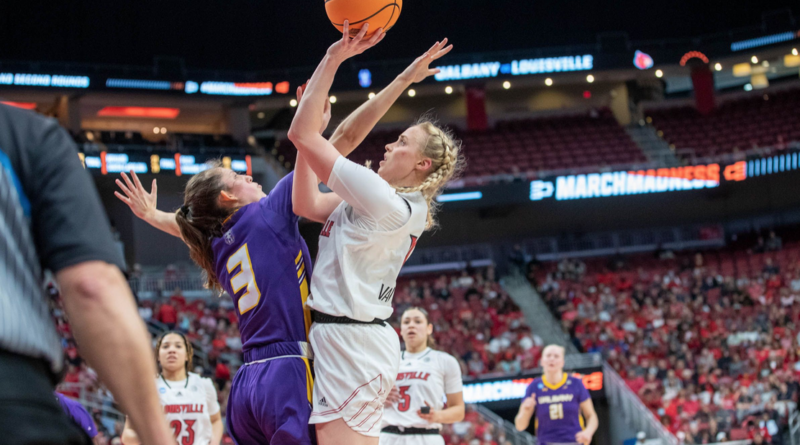 When Kianna Smith is hitting her shots, the University of Louisville wonen’s basketball team is hard to beat. The feat becomes almost impossible when Hailey Van Lith and Emily Engstler are on their games. Not much suspense in the opening round at the KFC Yum! Center with the Cardinals rolling to an 83-51 victory over Albany.

Smith would hit her first shot, a 3-pointer, to get her team off and running. She would follow it up with another 3-pointer seconds later and two more baskets for 10 points in the first quarter. Confident and focused, time to play for real, NCAA glory. She would only score five more the rest of the game for 15 points but had set the early tone. UofL owning a 48-20 margin at the half.

Van Lith would lead all scorers with 20 points. Engstler was closed behind with 17 points, but she was also pulling down seven rebounds and making an incredible seven steals.

Engstler, the beloved transfer from Syracuse, would also score her 1,000th point in her college career.

This Observer, sitting directly behind the Albany bench, could sense that the Albany Great Danes were in shock early on, unable to grasp the enormity of the task before. Albany Coach Colleen Mullen constantly pacing the sidelines, never once warming her chair back. Her team closed the gap to six at one point, but that was never a serious hint of any ability to compete with the Louisville women. Her team would make 26 turnovers, resulting in 37 points for the home team.