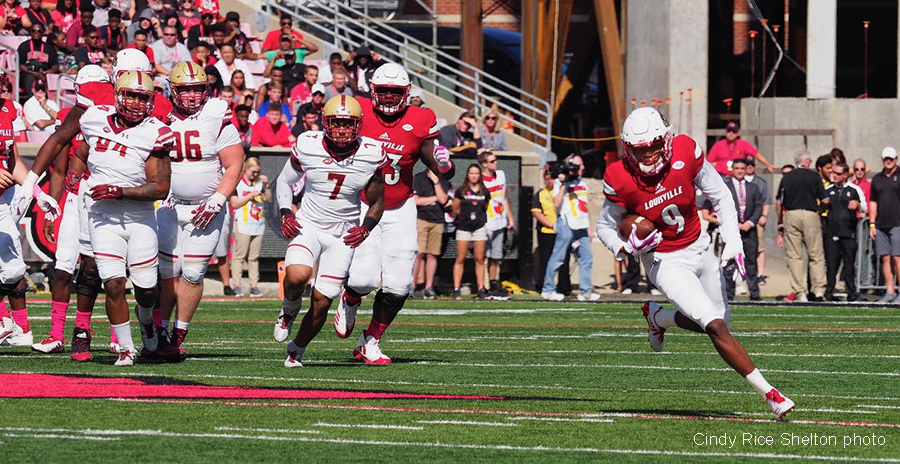 Wide receiver Jaylen Smith finally back in action, with 118 yards on six catches.

Wide receiver Dez Fitzpatrick as good as ever, turning seven catches into 127 yards, including a touchdown.

Quarterback Lamar Jackson living up to his reputation, with more amazing stats, including 181 yards and three touchdowns rushing, 323 yards and two touchdowns passing.

Some nice offensive stats, just not enough of them.

The University of Louisville’s offense could still be putting up points but there would never be enough. The defense was incapable of stopping Boston College, the Cardinals losing 45-42 in a three-ring offensive circus before 44,679 at Papa John’s Cardinal Stadium.

UofL’s defense remained as porous as always, seemingly unable to stop anyone on the first tackle attempt, usually on the second or third attempt. Not a pretty picture, foreshadowing visions of even more dismal performances in the weeks ahead against stronger opponents.

The exception was UofL linebacker Dorian Etheridge, the 6-foot-3 freshman winding up with nine solo tackles and five assists.

Jaylen Smith’s joyous return would be spoiled by a fumble following a catch with less than two minutes remaining at UofL’s 30-yard line. Just a matter of time, Boston College wasn’t going to be denied, converting a 27-yard field goal for the win in the closing seconds.

Boston College’s first Atlantic Coast Conference win since 2014, Louisville’s third ACC loss in four games this season. More than likely, it’s going to get uglier before it gets better for UofL football. Prepare yourself.