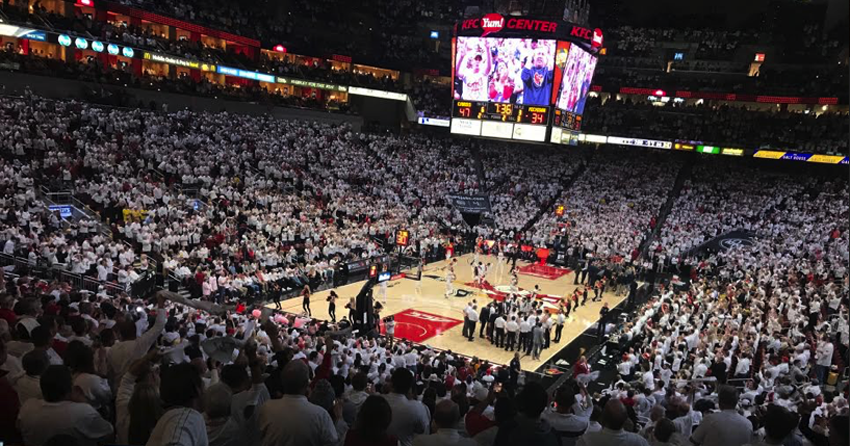 What a great place for University of Louisville to be in the college basketball world, ranked No. 1 in all the major polls. A place few believed was conceivable after all the consternation of a couple of seasons ago.

A UofL team cool, calm and collected with the sudden rise to the top, focused and hungry. Defending the lofty national ranking against fourth-ranked Michigan that was undefeated and on a roll, having knocked off Iowa State, Gonzaga and North Carolina last week.

The Cardinals strictly concerned with taking care of business, following the game plan to the letter. Unveiling a level of defensive efficiency not seen  around here for a while, taking it to a new level. Also bringing a disciplined approach to offense, distributing the ball, waiting for the right shots and crashing those boards.

A near capacity throng of 21,674 fans at the KFC Yum! Center to see UofL leading the game from beginning to end, emerging with a convincing 15-point 58-43 win over the Michigan. A fan base delighted and thrilled with Louisville’s return to the upper echelons under Coach Chris Mack. Loud, noisy, boisterous, engaged for 40 minutes.

Jordan Nwora, passing up a chance at the NBA for this team, leading all scorers with 22 points and pulling down 12 rebounds. Steven Enoch, continuing to improve, contributing 13 points and 10 rebounds.

Dwayne Sutton, everywhere during his 35 minutes of playing time, with 11 rebounds and four points. Chris Mack noting that Sutton also denied 17 Michigan cuts to the basket, thriving on his coach’s version of pack line defense.

Louisville basketball quieting the skeptics who said the Cardinals hadn’t beaten anybody in its first seven wins (with apologies to Miami and Western  Kentucky). Not bedazzled, beguiled or boastful about their early success and the accompanying recognition. Not ready to rest on its laurels, with so much more success possible in the season ahead.

ACC competition resumes soon, providing immense challenges, and those inevitable ups and downs. Meanwhile, UofL fans can enjoy the time at the top.