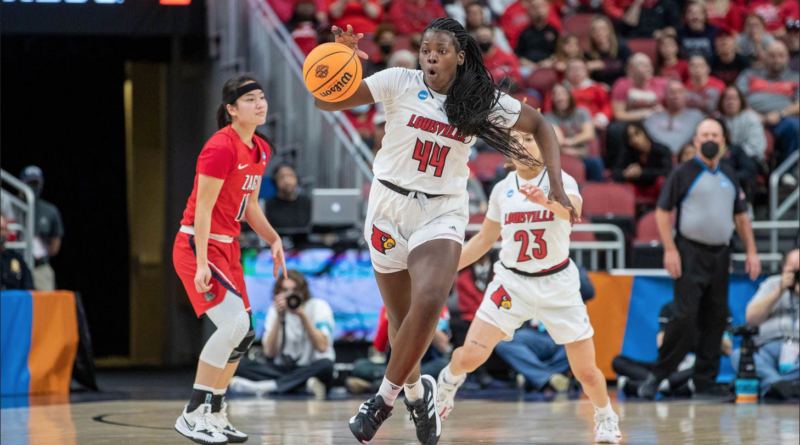 Olivia Cochran on a roll in NCAA second round, get out of her way (Mike DeZarn photo).
Basketball
Charlie Springer 3 min read

Too good to be true that 14-0 jump start by the University of Louisville women’s basketball team but the Cardinals will need every one of those points in a 68-59 win over Gonzaga in the second round of the 2022 NCAA tournament at the KFC Yum! Center. Jeff Walz’ team punched its ticket for the Sweet 16 for the fifth straight season in front of 10,414 fans.

Lots of moments in this game but none more memorable than Olivia Cochran intercepting a Gonzaga pass and going the distance for a wide open layup during that opening flurry. Let is be known that everyone is on board, committed and engaged, with everything on the line.

Equally involved is one Hailey Van Lith, nonstop and unstoppable, coming through with basket after basket, crunch time after crunch, leading all scorer with 21 points. She lives for these kind of moments, at one point seeming to do a pirouette after one of her 3-point baskets. “I’m not much of a dancer, so I’m not sure I did a pirouette,” she said in the post-game press conference. “But I’m very passionate about basketball and I really love to play, and this is the tournament that you live more. ”

Her teammate Emily Engstler with a few theatrics as well, including an impossible twist-around the basket that somehow went through the net. “A hundred percent travel,” she responded. “No questions asked. I think he thought I was still in the air, but in no form did I jump. Like I don’t even know how I made it. I told myself to put the ball on the floor and then spin, but it just happened so fast. I don’t know. ”

Engstler managing to go the distance this time without fouling out, controlling her emotions on controversial officiating calls. Coach Walz and Engstler having a long discussion during a fourth quarter timeout. “We were just talking about staying calm and composed and understanding that he has my back and that,” she said. “It’s really loud in there, that it’s hard to hear but that he’s fighting for us. I think that’s good to hear out of his mouth sometimes, and it’s good to have that confidence on my shoulder that he’s there.”

Walz said getting off to a fast start was important. “We turned them over and scored off their turnover,” he noted. “To be honest, we ended up with 23 points off their turnovers, but the problem is we turned them over 18 times. You’ve got to try to — at least three-fourths of the time when you turn somebody over you’ve got to convert those into points. I would have liked to have seen us with about 28 points. But we missed some transition lay-ups and some shots that we normally make.”

“Overall the start was outstanding. Our intensity was great. Our crowd was amazing. The crowd was absolutely amazing, and I appreciate all of them.”