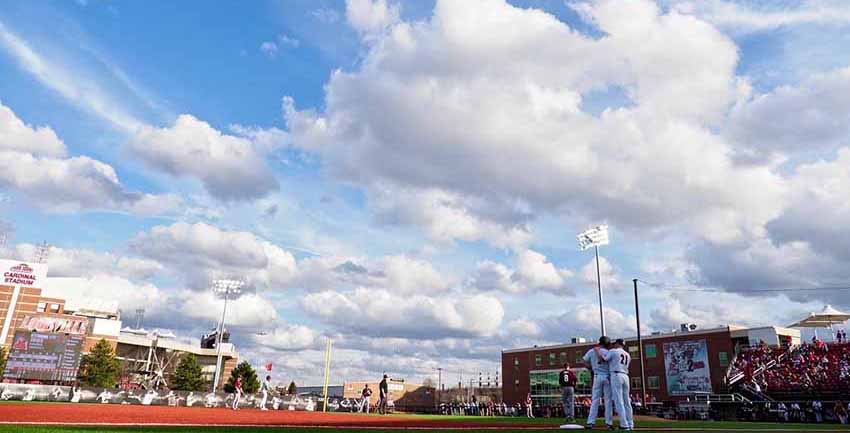 One more day, one more day without sports. No games in any sport. None whatsoever. Who knew the world could survive this long without athletics? Certainly not the Observer, whose life revolves around University of Louisville competition.

Scheduled for the calendar on Tuesday was the season’s first baseball game between UofL and the University of Kentucky. Jim Patterson Stadium would have been packed, with up to 4,500 people in the stands. Fans lining the fences, teeming the left field berm, rocking the playground.

This could have been the year for UofL baseball, blessed with one of the best pitching staffs in college baseball. A starting lineup of young hitters who were starting to come on strong when the season was so rudely interrupted. The program predicted to be No. 1 in the nation. All for naught.

The biggest fear for now is that this nightmare stretches into the fall, threatening to disrupt the college and professional football seasons. Basketball even. And possibly baseball again next year.

University campuses are like ghost towns, with almost all students, faculty, employees and administrators working or teleconferencing from home. The bursars and other financial types, along with athletic directors, going over every line item, developing multiple scenarios. The same folks taking pay cuts, hits to their individual retirement accounts, incurring furloughs or layoffs.  All of them preparing for the worst, hoping for the best, and, if they’re smart, praying for the day when the virus becomes just another ugly memory.

Just when one believes one has endured much of what life can throw at the one, along comes something that makes past challenges seem like child play. This one unimaginable, the COVID-19 pandemic, posing an undeniable threat to humankind. The worst since the Spanish Flu which killed 50 million people worldwide, including 675,000 in the U.S., according to the CDC.

To make things worse this COVID-19 pandemic comes with a large degree of unpredictability, including stealth qualities. One can have it and not know it, routinely going about daily life. No way of many people confirming whether they have it or not, with the testing materials and protocols still in development or playing catch up. No way that is unless one already has severe, sometimes irreversible symptoms. In many cases, the inflicted affecting people they love the most.

Major shortages of personal protective equipment, with civilians forced to pay deference to medical professionals when it comes to necessities like face masks. The doctors and nurses definitely need the face masks, the gloves and other items but so, too, does everybody else. Get with it American industry.

Meanwhile, a major segment of the mainstream media attacking the Administration dedicated to finding solutions, attacking the leadership at every turn. Political partisanship raising its ugly face every time Congress attempts to provide financial assistance. All hands may be on deck but all too often they are running in different directions.

While there’s a strong desire to go back to normal, and some states are already taking steps, there are many unknowns and shortcomings about the future of the pandemic. Flattening the curve could be just a temporary thing, with scientists already warning about even worse consequences in the fall.

So much dissension, so many unknowns, so few answers coming in the near future. The memories of Al Greener and the pep band playing “All Hail, UofL,” and Sean Moth leading the fans in singing “Take Me Out to the Ballgame” will have to sustain one for now.

2 thoughts on “University of Louisville athletics will return some day”