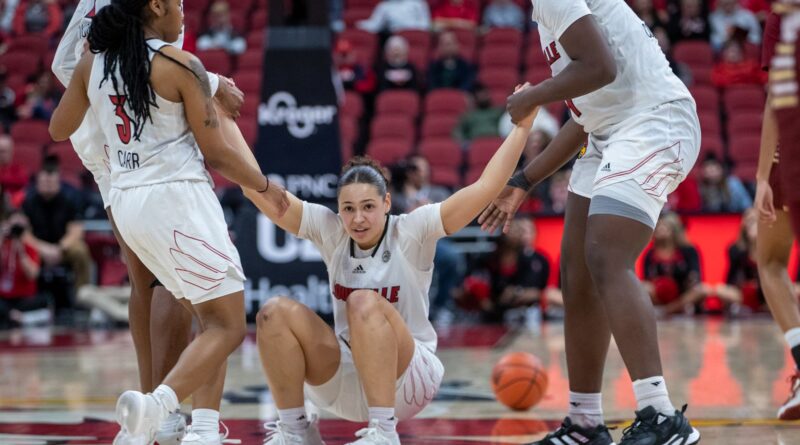 Mykasa Robinson gets off the floor again with an assist from her teammates in her 145th record game as a Cardinal (Mike DeZarn photo).
Women's Basketball
Charlie Springer 2 min read January 20, 2023January 20, 2023 0 Comments

Mykasa Robinson’s name is synonymous with University of Louisville women’s basketball. She embodies the best of what every UofL fan, every UofL teammate, and every UofL coach wants to see in a Cardinal uniform. Fearless, energetic, tenacious and non-stop action, her body on the line every game, every play, every way.

Robinson in her fifth season now as a graduate student, playing with the same amount of enthusiasm and energy she did as a freshman during the 2018-19 season. She  played in her 145th game for Louisville in a 73-65 win over Boston College in front of 7,592 fans at the KFC Yum! Center. That’s a record number of games for a UofL player, a mark previously held by Jazmine Jones. The number would be even higher had she not missed three games in December due to concussion protocols.

Her unique talents were just what were needed against a surprising Boston College team that refused to wilt.  Again providing the spark off the bench, registering eight points, four assists, four rebounds, and two steals. Six of her points coming in the fourth quarter.

In the midst of a tightly contested second half, UofL’s Chrislyn Carr buried a three from the right corner after a Louisville steal with 4:51 remaining in the game to give the Cards a five-point cushion, 62-57. On the ensuing Cardinal possession, Robinson drove down the lane and dropped the ball down to an open Nyla Hariis hitting the layup from the right block to extend the lead to seven.

“She always plays hard,” said Coach Jeff Walz in the post-game press conference. “She will guard one through four, guard a five if she has to. She comes up with extra possessions for us, a big offensive board. She was right there in that little scrum, came up with the steal that led to a three that gave a little breathing room. She’s a poster kid for the program because of how hard she works and how she carries herself.  A great ballgame tonight, I was really proud of her.