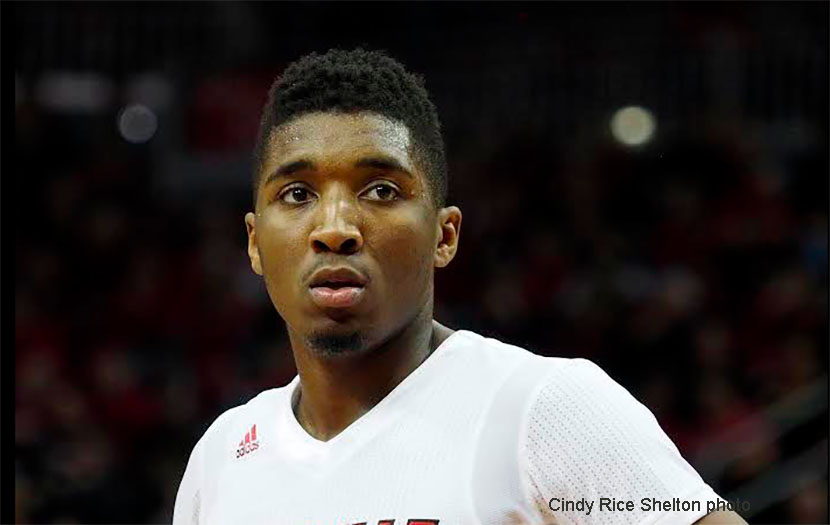 A little shaky getting out of the gate, understandable with so few members of the University of Louisville basketball team having NCAA tournament experience. Good to get those first few minutes out of the way, get down to business.

Not the best of starts for Donovan Mitchell, his first ever appearance in the tourney, missing all of his first eight field goal attempts in the first half.  Actually a good day for Mitchell, not allowing his lack of scoring to affect the rest of his game. He would wind up with nine points, 10 rebounds, fives assists and three steals.

“I was very impressed with Donovan Mitchell,” said Coach Rick Pitino afterwards. “I’ve been trying to get him to focus on other things other than scoring. If it’s not your night because you’re the main target to do other things … To me, he’s come a long way.”

Equally encouraging was the fact that his teammates picked up the slack in UofL’s 78-63 win over Jacksonville State in the tournament’s opening round. Playing aggressively, dominating the backboard 36-23, making 11 of 14 free throw attempts, and hitting 48.4% of their field goal attempts, including a third of their 3-point attempts.

Fifth-year senior Mangok Mathiang looking very comfortable around the basket lately, connecting on eight of his 13 field goal attempts, and leading his team in scoring with 18 points. Made both of his free throw attempts as well. Hopefully, he’s finally getting it in the twilight of his college career, maybe just the right time for UofL.

Deng Adel may have taken his play to another level, becoming one of his team’s most consistent players, reliable on both offense and defense. Adel making six of seven field goal attempts, including both of his 3-point attempts, for 16 points. Two of two free throw attempts.

A collective sigh of relief for free throw concerns, with the Cardinals making 11 of their 14 free throw attempts. Quentin Snider made one of two attempts, but Anas Mahmoud missed both of his.

Come on, Anas. Every shot matters this time of the season. Especially with a rematch Sunday of the schools that competed for the national championship in 2013.