Michael Dyer probably isn’t going to be drafted during this year’s National Football League draft. Good news for University of Louisville fans on at least one front.

The bad news, however, is that Dyer may have slipped to the fourth spot on the running back depth chart, failing to see any action during the most recent game against South Florida. 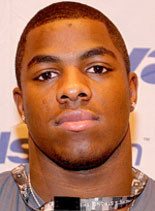 Except for few brief instances, Dyer has exhibited little of the speed and power at UofL that he showed at Auburn during his freshman and sophomore seasons.

In 2010, Dyer rushed for 1,093 yards on 182 carries and five touchdowns, breaking the Auburn record for most rushing yards by a freshman, previously held by Bo Jackson. Next season he had 1,242 yards rushing on 242 attempts, 10 touchdowns, averaging 103.5 yards per game.

This season Dyer has carried the ball 44 times for 238 yards and two touchdowns. His best game was against Kentucky when he had 62 yards on 11 carries. But more recently, in games against Rutgers and Central Florida, he managed only 18 yards in eight tries.

Hard to believe that the outstanding offensive player in the 2011 BCS Championship game, when he rushed for 143 yards, lost out on so much by sitting out a year, regardless of the circumstances. He showed indications earlier this season of returning to form, but lately he just seems to be struggling.

Possibly Charlie Strong was trying to get Dyer’s attention by letting him warm the bench Saturday. Too much proven potential not living up to expectations.