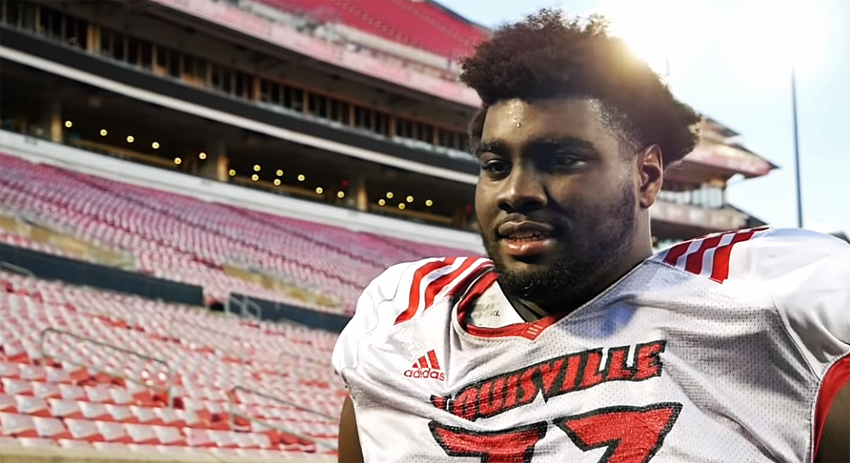 Some University of Louisville football fans won’t like my take. I’ll let you decide.

“First of all, I want to thank the man above for giving me the physical opportunity to play this great game, without him I wouldn’t be able to accomplish what I have in my career,” said Becton in a prepared release,
thanking his parents, coaches, fans and teammates “for an amazing year and helping me become one of the top linemen in the ACC.”

This is the part some won’t like. Why not one more game? The bowl game. It’s meaningless in the overall scheme of things but I think players owe it to their teammates, coaches, fans and the school to finish their careers if they are healthy.

When UofL needed a first down, the runners went behind Becton. He protected the quarterback’s blind side. Watching Becton block was fun. I made it a point personally to watch him and saw him push defenders as much five yards down field. On several occasions.

The 6-foot-8, 370-pound Beckton will go down as one of the top offensive lineman ever at Louisville. He was selected as the ACC’s Blocking Trophy recipient, the first Cardinal ever. He had started 33 games and had 60 knockdown blocks to help the Cardinals finish 7-5 and 5-3 this season.
He helped the Cardinals rushing attack average 214.2 yards a game, third in the ACC and 32.7 points per game.

I respect Becton because I believe he is a quality person who worked hard and gave the university everything he had. Quarterback Lamar Jackson played his final game in the bowl two years ago. Jaire Alexander did not.

If millions of dollars are at stake, however, why not just take out insurance policies as some players have done. That probably wouldn’t be the best interests of the player agents, not benefiting their bank accounts.

Forgoing the team’s final game leaves a bad taste and lack of empathy for a team’s most faithful fans. That’s too bad because his teammates could use him in the Music City Bowl.