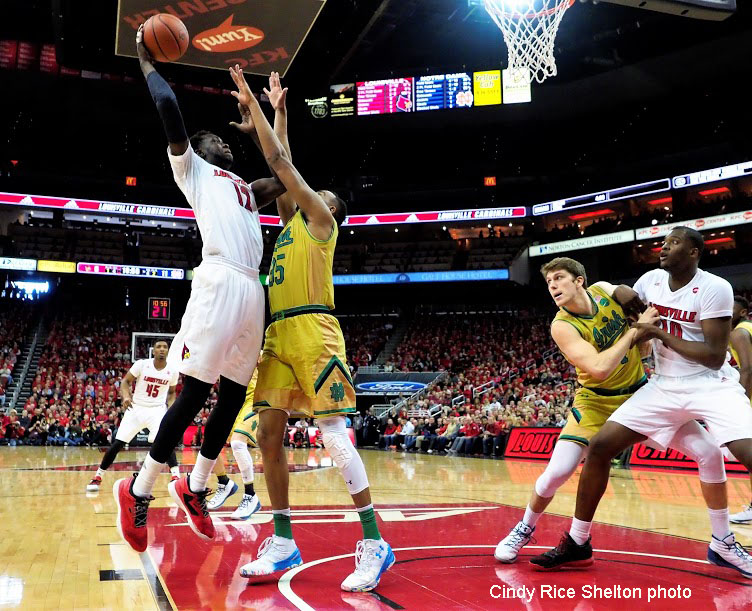 Mangok Mathiang may have had his best game since he first donned a University of Louisville basketball uniform five years ago during UofL’s 71-64 win over Notre Dame on Saturday.

Just happened to be Senior Night, a good time for the jovial 6-foot-10 Mathiang to also display traits of confidence and composure. Coming off the bench to score 18 points while pulling down 11 rebounds.

Equally impressive is that the official stats indicate that Mangok didn’t have a single turnover during his final game before a crowd of 22,612 at the KFC Yum! Center. Not even after he lost the ball on a one-man fast break that was as predictable as it was inevitable.

The win wrapped up a second place finish for Louisville in the Atlantic Coast Conference and guaranteed the Cardinals a double-bye in the upcoming conference tournament in Brooklyn, N.Y.

Mathiang scored 12 of his points in the first half, relieving Anas Mahmoud who had taken his starting position at center a couple of games ago. Whether this game was a breakthrough for him remains to be seen, with Coach Rick Pitino pointing out the play of his big men has been inconsistent at best.

— Donovan Mitchell was back as an offensive threat after all but disappearing in the Wake Forest loss, contributing a team-high 20 points on five of 15 field goal attempts. His four consecutive free throws in the final 22 seconds were crucial for the Cardinals.

— Quentin Snider was clearly the take-charge player during the final 20 minutes, scoring 15 of his 17 points in that second half.

— Deng Adel managed only six points on two 3-pointers, one of them a dagger giving UofL at the 39-second mark giving UofL a five-point lead.

Mathiang, meanwhile, was making the best of his last impression at the Yum! If he continues to show up, Louisville could be a serious contender.