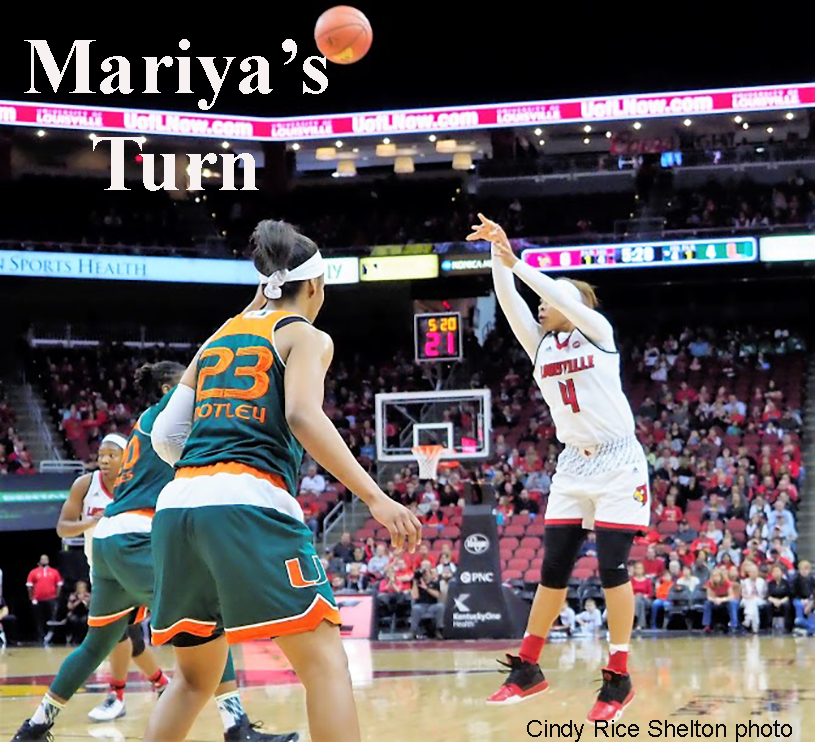 One never knows who’s going to grab the reins, assume the leadership role in a game for the University of Louisville women’s basketball team, especially in grinders against top 20 opponents.

Take your pick from Myisha Hines-Allen, Asia Durr or Mariya Moore. When one or more of them is having an off-game, count on at least one of them to be having an exceptional game. On Sunday it was Mariya Moore’s turn in the spotlight, putting the team on her shoulders in a 63-59 win over Miami.

Moore seemed to have an answer every time Miami got close, scoring eight of her game-high 24 points during the fourth quarter. She dropped in her fourth 3-pointer to give UofL a five-point lead after Miami had cut the margin to two points.

“Mariya wanted the ball today,” said Walz. “When she wants the ball, she screams for it. If you’re open and don’t get the ball, it’s because they don’t see you. You have to yell for it. She hit a big basket (a 3-pointer) going into half time.”

Giving credit where credit is due, Asia Durr would connect for six points, including a 3-pointer and three free throws during those last 10 minutes. She would contribute only eight points overall, but be credited with eight rebounds and four assists.

Hines-Allen having what some might describe as another challenging game for her.  Despite spending 13 minutes on the bench, she still turned in another double-double, with 10 points and 11 rebounds.

Non-stop Briahanna Jackson, always fun to watch, making that crucial jumper at the 2 minute mark to get the lead back to five again. Jackson with 11 points, five rebounds, four assists and three steals.

“When we get everybody playing well, we’re gong to be a tough team to play against,” said Walz. “I really like this ball club. Our goal is to get this team playing our best the last month and a half of the season. We’re going to continue to grind and I really believe we have a chance to be special.”