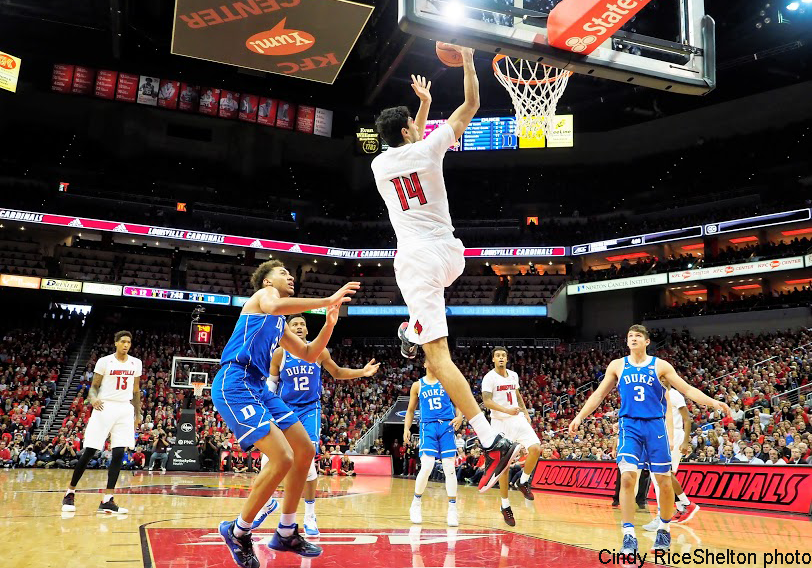 A couple of weeks ago the University of Louisville basketball team was 0-2 league play, stuck in the basement of the Atlantic Coast Conference. Some fans imagining the worst after losses to Virginia and Notre Dame.

Saturday, after their third straight conference win, a 78-69 decision over Duke, the Cardinals were tied for fourth place with Virginia. Back where they rightfully belonged, according to Mahmoud.

“We play more team defense. That shows how great our team is,” said Mahmoud. “As long as we get the ‘W’ that’s all that matters. I think we showed today that we’re as good as everybody.”

Probably meant anybody but who’s to argue with the 7-footer from Egypt. Not a coincidence that UofL’s three-game win streak began a game after Mahmoud returned from missing games with a concussion. He has clearly emerged from the crowd of Louisville big men as the undisputed man in the middle.

Mahmoud may have played his best all-around game Saturday, scoring 17 points and pulling down 11 rebounds. Equally important, he has become an intimidating presence under the basket, blocking at least one shot, altering at least three shots and discouraging who knows how many more.

Pitino described Mahmoud as UofL’s most improved player, along with teammates Donovan Mitchell and Quentin Snider who have been progressing nicely themselves. Pitino maybe working that magic again, putting key elements together as February draws nigh.

Mitchell no longer shy about taking the big shots at crucial moments, including a 3-pointer in the second half that would stretch the UofL lead to eight points at the 5:18 mark, the third of three straight baskets when UofL needed them most.

Snider pleased that other teammates are becoming more effective on the offensive end, rewarding them with six assists. He would also be credited with 13 points, including three 3-pointers, and three steals.

Those steals coming from Duke’s Grayson Allen on a day he would never forget. Reminded of his tripping episodes by jeering fans every time he touched the ball, Allen appeared shaky at times — coughing up the ball six times. He would still lead all scorers with 23 points.