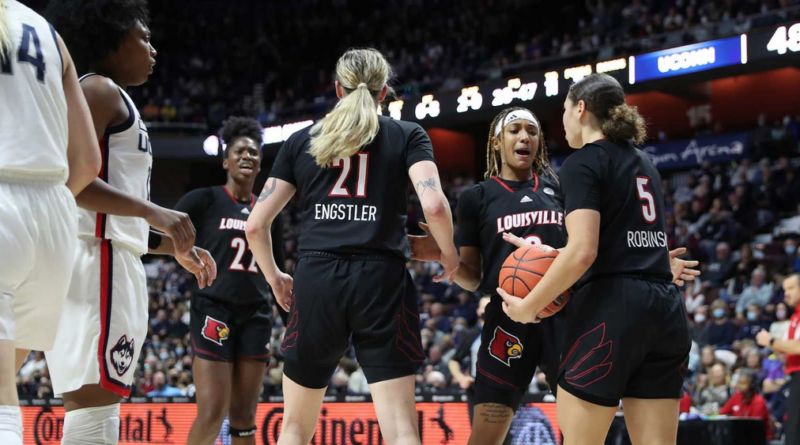 Back in the olden days, women’s athletics were primarily afterthought, not taken too seriously. All that has changed at the University of Louisville and elsewhere. They are taken very seriously by the discerning portion of the UofL fan base, the people who appreciate the ability to compete at the highest level in all areas of competition.

That brings us to the Louisville women’s basketball team, currently ranked among the nation’s top five teams, and having already defeated three top 10 teams this season. The latest victim being the high and mighty UConn by a score of 69-64 at the Mohegan Sun Casino in Uncasville, Conn. The first loss  in 31 games at what amounts to a second home court for the Huskies. A crowd of 8,204 dominated by UConn partisans.

Not an easy win, not an expected win even though UConn was playing without two injured starters. UConn is still UConn, still playing with people who would be starters at any other program. The Cardinals slow getting out the gate, falling behind 12-2 in the opening minutes, making only one of their first nine shots.

Some UofL fans may have been throwing up their hands at that point (ahem), but the Cardinals were never going to roll over. Louisville trailed the entire first half, hanging and hanging around.  Finally getting it first lead two minutes into the second half  on a jumper by Kianna Smith to make 29-28, capping a 7-0 UofL run to open the half.

”I know what everybody’s going to say, that they were shorthanded and everything,” said Coach Jeff Walz. ”And they’ve had some injuries, there’s no question about that. But, they’re still a pretty good ball club and I was really pleased with how we fought, how we hung in there.”

UConn dominated the low post with a 38-12 advantage on points in the paint and an 18-8 advantage in second chance points, but the Huskies shot just 3-15 from beyond the arc. But the UofL bench was outscoring the Huskies by 22-4 while the team was hitting 8 of 16 3-point attempts.

Hailey Van Lith scored 10 of her 16 points in the fourth quarter, tying Kianna Smith for scoring honors.   Ahlana Smith contributed an additional 11 points, including three of four attempts from beyond the 3-point line.

The 10th win in a row for the Cardinals (10-1). They’re headed to their homes for the Christmas holidays, returning Dec. 30 to begin the ACC grind, starting with Boston College at the KFC Yum! Center.