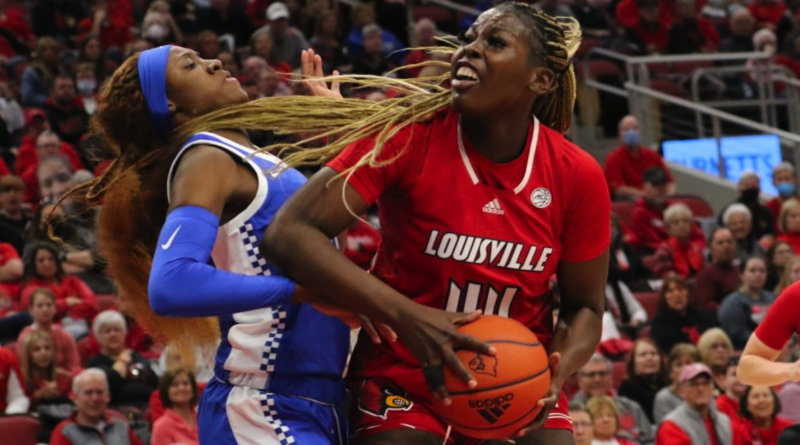 Typical drama between the University of Louisville and Kentucky women’s basketball teams. A tension packed, grinding and emotional battle, earmarked by bruising physicality. Both programs wanting the joy, dreading the potential pain of winning or losing, respectively.

Up by seven points in the first quarter, down seven in the second quarter, one point difference at the half. The UofL women not surprised that UK will not go down easily. Maybe shocked by some of the calls against the home team. Not letting the doubts deter them, the Louisville team emerging with the 64-58 win before 12,167 fans at the KFC Yum! Center.

The Cardinals clamping down on the Wildcats in the the third quarter, allowing them only one field goal and four free throws. Unable to put much distance between themselves and the visitors, they allow Kentucky to get a one-point lead with 4:44 in the game. The worst fears of UofL fans seeming imminent. But not if Alahna Smith and Hailey Van Lith can help it.

Smith and Van Lith would score two baskets each, eight of Louisville’s last 10 points, with a couple of free throws from Chelsie Hall.  Smith gave Louisville the lead and Van Lith added a layup off Emily Engstler’s   block. Smith’s layup and Van Lith’s jumper provided a 61-56 cushion before Hall sealed it at the foul line.

Not a good day for UK’s Rhyne Howard, who was guarded by a revolving committee of Louisville defenders. She would make only three of 13 shot attempts and nine points. Sadly for her, Howard has never participated in a Kentucky win over Louisville.

Fifth win in a row for UofL over UK in six years. Ideally the last time they will meet this season. Too much drama for the Observer.