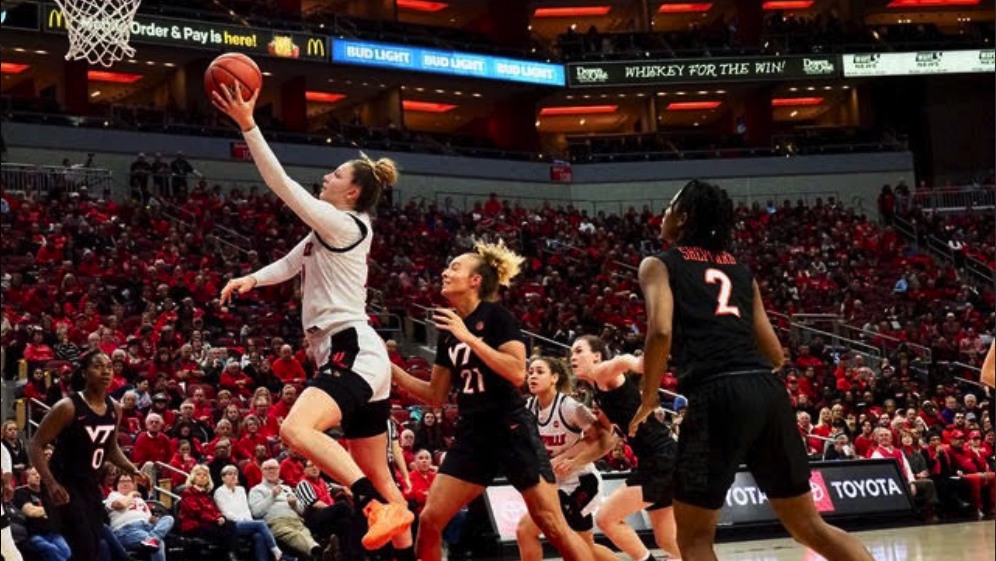 Senior Day for the University of Louisville women’s basketball team. Time to officially recognize the incredible accomplishments of a class that participated in a record number of 124 wins over the past four seasons.

Laemmle, the 5-foot-2 dynamo, getting her first start in a Cardinals’ uniform, connecting on a 15-foot jumper. Those would be her only points, but she had set the tone, with Louisville rolling to a convincing 70-53 win over a very good Virginia Tech team.

The other good news, witnessed by a crowd of 10,423 people at the KFC Yum! Center, was the return of recently injured Dana Evans and Elizabeth Balogun to action. Entering from the bench, Evans would score eight points and make four assists in just over 24 minutes. Balogun with three points in her 15 minutes.  Both on the way to recovery.

The Cardinals would force Virginia Tech into 18 turnovers, earning 21 points over the VT errors, while making only seven turnovers themselves.

“Our kids did a fantastic job,” said UofL Coach Jeff Walz. “We went into this game knowing Tech could shoot the three point shot, especially Dara Mabley and Aisha Sheppard. We knew that if Elizabeth Kitley gets 30, she would get 30, but we only going to give them two-point attempts …”

Between Mabley and Sheppard would get only five 3-point attempts while making only one of them, contributing only seven points collectively.  Kitley, a  6-foot-5 candidate for ACC freshman of the year, would get 17 points.