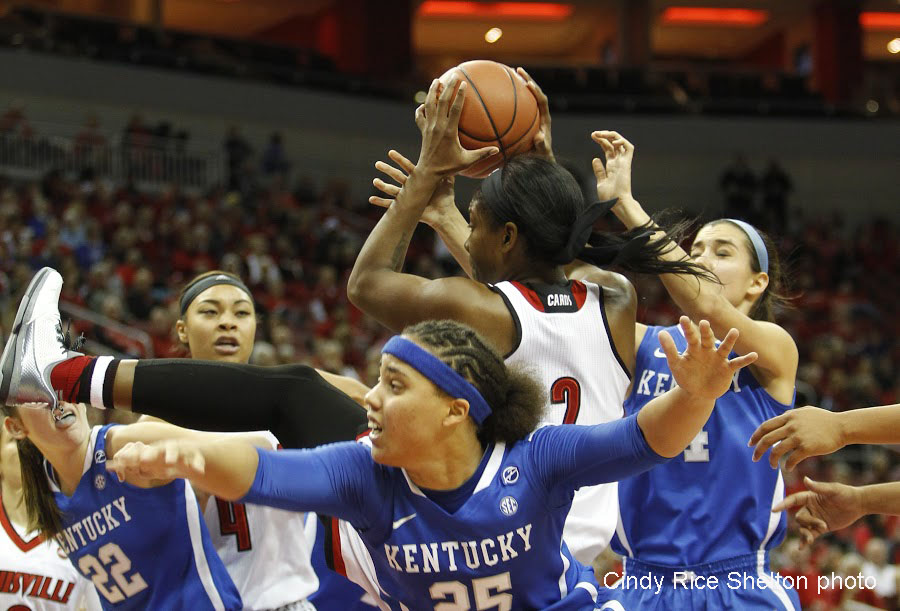 When teams from the universities of Louisville and Kentucky clash, it’s never just another rivalry game, whether it’s in basketball, football, soccer or baseball.  The friction extends far beyond the playing fields to every day walks of life and the antagonism never ceases.

Coach Jeff Walz has a team that includes only one player from the state of Kentucky this season, rarely having more than one or two local players on his team. This may help explain why UofL had lost five straight games to UK going into Sunday’s game.

Tom Jurich, vice president of athletics, stopped by the gym after practice a couple of days ago to put the rivalry in perspective. Walz also had that memorable tirade, informing team members he is not big on participation trophies.

“We badly wanted to beat them,” said Myisha Hines-Allen after the game. “It was important, not only for us for this city and our university. It felt great to finally get it done.”

Hines-Allen spoke for many people in the crowd of 12,245 at the KFC Yum! Center, many of them still frustrated about the shocking UK upset in the recent football clash. The pain of losses to the Wildcats are slow to heal, mainly because UK fans don’t want UofL fans to forget.

Louisville would lead by nine points at one point but it was obvious that UK was not going to roll over, that UK wanted a sixth win in a row in the series, that UK wanted the Cardinals to lose their third straight game this season. Their mission of UK teams, regardless of the sport, is to make life miserable for UofL fans.

That’s a big reason why Louisville 69-67 win over Kentucky was so sweet, denying the Wildcats the satisfaction of giving into them, sending them home with their tails between their legs. Such a gratifying feeling, seeing the Cats go down to defeat anytime, but especially when it’s UofL that has brought them to heel.

— Hines-Allen was bumped around all game long, refusing to wilt, playing one of her best games, reminding fans of why she was the ACC player of the year last season — 26 points, 5 rebounds and 2 blocks before filing out with 1:15 left in the overtime.

— Briahanna Jackson is the heart, the heart and soul of this team, a self-motivator with a non-stop motor. Small and perky but a constant pest, always in your face. Jackson would score only 5 points, but she would corral 10 rebounds, come up with 5 steals and make an incredible 8 assists. If the 5-foot-6 senior finds her shot again, look out.

— Asia Durr in her first game against UK would connect on only five of 18 field goal attempts, including four 3-pointers, and one of four free throw attempts for 15 points. Mixing it up under the boards, coming out with five rebounds.

— Jazmine Jones, a freshman from Tallahassee, with an impressive showing for a first-timer in a very tough environment, contributing 7 points, 4 rebounds and an assist.

— Senior Courtnee Walton taking a beating in the middle but emerging with 10 rebounds, playing a big role in holding UK center Evelyn Akhator to 10 points.

UK’s Makayla Epps, hopefully playing in her last game against UofL, keeping her team constantly on the verge of winning with 22 points and 16 rebounds. Losing in the final appearance against the team she made a verbal commitment to coming out of high school — only to renege on it and play for the Wildcats. Probably the unhappiest Wildcat of all following the loss.