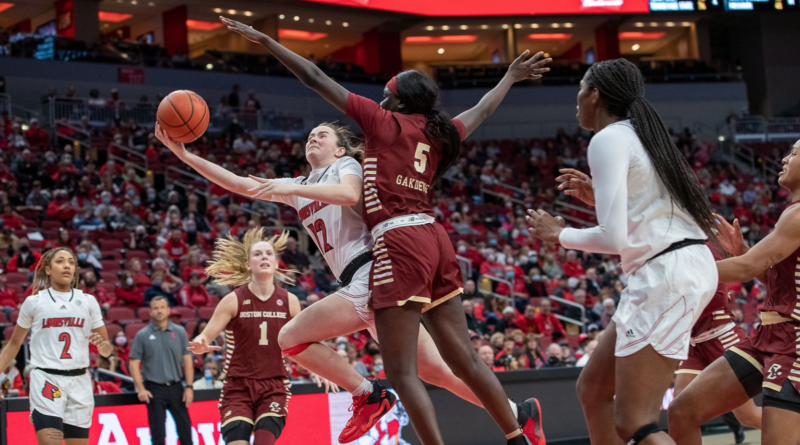 Back from the holidays, the Christmas turkey, tons of extras, all the adoring family members. Time to get going again.

Shaking off the seasonal good times requiring more than a few minutes, actually more than a full quarter it seemed. But the University of Louisville women’s basketball team is back in the winning column again, with its first Atlantic Coast Conference victory, a 79-49 win over Boston College.

On the same evening, South Carolina, the No. 1 women’s team in America, would lose by one point to Missouri at the buzzer. Posing the possibility that UofL could move up to the top spot again if it takes care of business Sunday at Georgia Tech. But as Louisville freshman Payton Verhulst would not in the post game press conference, it is far too early to be concerned about rankings. She, like the rest of her teammates, just want to keep getting better.

Verhulst would have her best game thus far as a Cardinal, collecting 12 points and 20 minutes of playing time..

Fortunately for UofL, the Boston College players were trying to recover from the holiday break themselves. Both teams struggled in the first quarter, combining for just 12 points at the media timeout. Louisville forced eight turnovers to take a 12-11 lead at the end of the first quarter. UofL would shoot 63 percent in the second quarter to take a 35-24 lead at the half. After that it was all down hill for the Cardinals, allowing reserves to see most of the action in the fourth quarter.

Emily Engstler would lead Louisville with 14 points, seven rebounds and four assists. Hailey Van Lith added 12 points on 5-10 shooting. Olivia Cochran and Liz Dixon chipped in 10 points each. Norika Konno with one of her best games ever, adding eight points.

Gotta get up all again and up early Sunday morning for noon tip off against Georgia Tech in Atlanta.