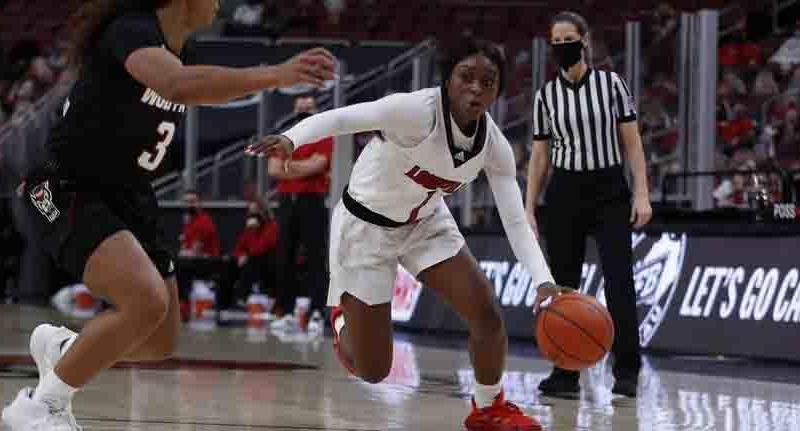 Not enough Dana Evans to go around, but she had 29 points (UofL photo).
Basketball
Ed Peak 2 min read

Fun while it lasted, Louisville’s perch at No. 1 atop the women’s college basketball world.  Over now, the 16-game winning streak snapped 74-60 at the hands of an inspired North Carolina State team.

On this day North Carolina State (12-1, 7-1) was better. The Wolfpack shot better, rebounded better and defended better. Not surprising, NC State was coming off its first loss of the season, was playing the No. 1 team. All the motivation in the world, with Louisville feeling the weight of being the top-ranked team. Plus, UofL had won the last nine games against NC State. More than a little motivation for the fourth-ranked team. Trade places and the results could be easily reversed.

A comment tweeted by Courier-Journal columnist Tim Sullivan was perplexing. “Louisville outplayed, outclassed. North Carolina State clearly the better team,” he tooted. Outclassed? I didn’t understand the comment nor did the pro Louisville crowd with whom I was watching the game. Lots of people at the CJ not happy unless they’re offending their readers.

It was  close most of the game until a 16-3 run by NC State in the fourth quarter. Louisville was still scrapping and clawing, trailing 65-47 with over four minutes to play. Walz went to a full court press and that caused some havoc. Dana Evans and Mykasa Robinson forced some turnovers and Louisville cut the lead to 69-60. This is where I have trouble with the “outclassed” comment. The Cardinals could have just said this is not our night and given up.

Louisville does seem to have trouble defending bigger inside players. Freshman Olivia Cochran hasn’t adjusted to defending post players in the college game. Cochran turned the ball over five times. Redshirt junior transfer Kianna Smith, a great 3-point shooter, but not so good at defending. I could go on.

Evans, a candidate for National Player of the Year, scored 29 points, doing everything she could do to try and rescue the Cardinals. However, she was 10 of 22 from the field, had one assist while committing three turnovers. The Wolfpack defense was that good, at least this night, holding Louisville to 38.3 per cent field goal shooting.

A good run is over. We’ll see if this young team and Evans, the only senior, can put together another streak and climb back to the top.

2 thoughts on “Louisville women relent to fired up NC State”